We present the case of a 38-year-old right-hand-dominant female with a longstanding extensive high flow arteriovenous malformation (AVM) affecting the left hand and forearm. The patient’s main complaints were altered sensation in the left hand and difficulty with co-ordination. Clinical examination revealed reduced global sensibility in the hand and evidence of a vascular steal phenomenon resulting in a cold thumb and small finger without trophic changes. Subsequent nerve conduction studies identified peripheral neuropathy affecting the median, ulnar and radial nerves. There was no evidence of entrapment neuropathy and the findings were attributed to nerve ischemia as a result of the steal phenomenon. This case represents an unusual complication of an AVM of the upper limb which has not been reported previously to our knowledge. Patients with complex AVMs presenting with atypical peripheral neuropathies should be assessed for the possibility of steal phenomenon.
Level of Evidence: Level V, risk/prognostic study.

Titel
Ischaemic peripheral polyneuropathy in the upper limb as a result of steal phenomenon in an arteriovenous malformation
Autoren:
Felicity Page
A. Harb
G. Titley 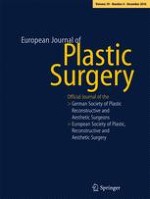 Complications caused by injection of dermal filler in Danish patients

Nose clefts: own experience of treatment with different types of congenital nasal anomalies