Homocystinuria (HCU, OMIM 236200) is a rare autosomal recessive genetic disease caused by cystathionine β-synthase (CBS, EC 4.2.1.22) deficiency (Mudd 2011). The phenotype is variable and can include: Marfanoid appearance, mental retardation, epilepsy, vascular complications, ectopia lentis and osteoporosis (Mudd et al. 2001). Based mainly on genotype (Mudd et al. 2001), a subset of patients respond to pyridoxine (vitamin B6), these patients tend to present later, and with a milder phenotype (Mudd et al. 1985). Treatment for non-pyridoxine responsive patients includes a combination of a restricted protein diet, methionine-free amino acid supplementation, vitamin B12, folate and betaine.
Thromboembolic disease is a major cause of morbidity and mortality in HCU. In an untreated cohort of HCU patients, 50% experienced a thromboembolic event by the age of 30 and thromboembolism was reported as a significant factor in 80% of deaths (Mudd et al. 1985). Accelerated atherosclerosis is also known to be associated with HCU (Mudd et al. 1985; Yap et al. 2001; McCully 2015). No clinical trials have investigated the issue, but observational studies (Wilcken and Wilcken 1997; Yap et al. 2000, 2001) have described a lower incidence of vascular complications in treated patients compared to the expected rates derived from a historical untreated cohort (Mudd et al. 1985).
Anzeige
Following the incidental documentation of aortic root dilation in a patient with HCU, patients at our centre were systematically screened with an echocardiogram in order to investigate the prevalence of dilation of the ascending aorta in this population.

We conducted a cross-sectional study of patients with HCU known to the Charles Dent Metabolic Unit of the National Hospital for Neurology and Neurosurgery, London ( N = 32), the John Radcliffe Hospital, Oxford ( N = 1) and Southmead Hospital, Bristol ( N = 1) who underwent a transthoracic echocardiogram in 2016. The biochemical diagnosis of HCU was based on plasma total homocysteine (Hcy) levels, according to the current recommendations (Morris et al. 2016) and patients were not routinely genotyped. Plasma hypermethioninemia (>45 μmol/L) was documented in 30 of the 34 patients. Cystathionine was not routinely measured. Of the remaining four patients, methionine levels were either ≤45 μmol/L or could not be traced. All four of these patients were clearly documented to be responsive to pyridoxine. As universal newborn screening for HCU only commenced in the UK in 2015, all of these adult patients were either diagnosed following clinical presentation or as part of a family screen following diagnosis in an index sibling. Clinical details were obtained from electronic records. Pyridoxine-responsiveness was determined at diagnosis and was defined as a sustained reduction of plasma total Hcy to <75 μmol/L following treatment with pyridoxine, with normal folate and B12 levels, and without the need for betaine or dietary modification. As part of routine clinical follow up patients also underwent bone mineral densitometry. Reduced bone mineral density was defined as Z- score < −2.0 or T-score < −1.0.
Aortic root dimension was obtained in the parasternal long axis view, measuring the maximal diameter at the sinuses of Valsalva, according to the current recommendations (Lang et al. 2015). The predicted aortic root diameter was calculated considering age, gender and body surface area (BSA, calculated using the Dubois formula), according to Devereux et al. ( 2012) by using the following formula: 2.423 + (age [years] * 0.009) + (BSA [square meters] * 0.461) + (gender [1 = man, 2 = woman] * 0.267). Z-score was calculated using SD 0.261 cm. Aortic dilation was defined as Z-score ≥ 2.0 SD, and graded mild (Z-score 2.0–3.0), moderate (Z-score 3.01–4.0) and severe (Z-score > 4.0). The ascending aorta, valvular disease and left ventricular ejection fraction were evaluated according to current guidelines (Lancellotti et al. 2013; Lang et al. 2015).
Cumulative Hcy exposure was calculated as follows: (age at diagnosis * Hcy at diagnosis) + [(age at last follow up – age at diagnosis) * mean Hcy during follow up].
Anzeige

The study population consisted of 34 patients, with a median age of 44.3 years (IQR 33.3–52.2), 50% of them males. Seventy percent of patients had been diagnosed before the age of 18, and 29% were pyridoxine-responsive. Patients who were not pyridoxine-responsive were advised not to consume excessive protein, but as a restricted protein diet is difficult to initiate and sustain in older patients, only four patients followed a formal prescribed low protein diet with specific HCU-appropriate amino acid supplementation. Twenty-seven (79%) had at least one of the known complications of HCU, the most frequent being lens dislocation (present in 62%). Vascular complications were venous in all cases, no patient had a history of arterial thrombosis. Eight patients (24%) had a history of hypertension. Clinical, laboratory and echocardiogram findings of the overall population are reported in Table 1. Seven patients (21%) were found to have a dilation of the aortic root, this was mild in two cases (6%), moderate in four (12%) and severe in one (3%) (Table 2). The ascending aorta was within normal limits in all cases. Significant (≥ moderate) aortic regurgitation, secondary to moderate aortic root dilation, was documented in two patients. Significant mitral regurgitation due to prolapse of both valve leaflets was found in a single patient who also had mild aortic root dilation. All patients were found to have a non-dilated left ventricle with a normal ejection fraction. Against medical advice, the patient with severe aortic root dilation exercised regularly in the gym, focusing mainly on weight lifting and took protein powder supplements with the aim of increasing muscle mass. The concern in this case was that he might also have a second underlying contributing genetic condition. Sequencing of his genomic DNA against a panel of 20 genes associated with familial thoracic aortic aneurysms identified only heterozygous previously described known pathogenic CBS mutations (c.[667-14_667-7del(;)1566del]). This gene panel included the ACTA2, COL3A1, FBN1, FBN2, FLNA, GATA5, MFAP5, MYH11, MYLK, NOTCH1, PRKG1, SKI, SLC2A10, SMAD3, SMAD4, TGFB2, TGFB3, TGFBR1 and TGFBR2 genes. Of the four patients with moderate aortic root dilation, two lifted weights regularly in the gym and one of the two also took protein powder supplements.
Table 1
Clinical, laboratory and echocardiogram findings of the overall population
The complications considered were: lens dislocation, venous or arterial thrombosis, intellectual impairment, epilepsy, reduced BMD and pancreatitis
Hcy homocysteine, BMD bone mineral density, BP blood pressure, EF ejection fraction
Table 2
Characteristics of patients with a dilated aortic root
F folate, B12 vitamin B12, P pyridoxine, B betaine, Diet prescribed low protein diet
When comparing patients with dilation of the aortic root to those without, there were no significant clinical, laboratory or echocardiographic differences, with the only exception being that the diameter of the ascending aorta was larger in the group with a dilated aortic root, albeit still within normal limits (Table 1). In the subset of patients with complete available data ( n = 12), no correlation was found between cumulative Hcy exposure and aortic root Z-score ( r s  − 0.007, p = 0.983; Fig.  1).
×

A limitation of the present study is the absence of a control group and our findings should be confirmed and the possible modifier role of isometric exercise investigated through larger, case-control studies. Our data on the prevalence of aortic root dilation cannot be compared directly with available literature due to the different definitions of ‘aneurysm’. However, the few available studies suggest that it is a rare condition in the general population and the prevalence in our cohort was decidedly higher than could be expected. Amongst 6971 Japanese adults undergoing chest CT for lung cancer or tuberculosis screening the prevalence of dilation of the ascending aorta (defined as mean diameter for age + 3SD) was 0.04% (Itani et al. 2002). In the Heinz Nixdorf Recall study, aortic aneurysms ≥5 cm on chest CT were found in 0.34% of 4129 German subjects (Kälsch et al. 2013).
Despite the fact that 70% of our population was diagnosed in a pediatric context and have undergone medical follow-up ever since, and that there have been no documented cases of aortic dissection amongst the patients followed up at our centre, this cross-sectional study is not able to determine the risk of aortic dissection in HCU and larger prospective studies will be required.
Anzeige

All procedures followed were in accordance with the ethical standards of the responsible committee on human experimentation (institutional and national) and with the Helsinki Declaration of 1975, as revised in 2000. The study included only tests derived from routine clinical practice and therefore did not require ethics committee approval at our institution. Individual written consent was obtained from those patients for whom identifying information is included in this article.
Open Access This article is distributed under the terms of the Creative Commons Attribution 4.0 International License (http://creativecommons.org/licenses/by/4.0/), which permits unrestricted use, distribution, and reproduction in any medium, provided you give appropriate credit to the original author(s) and the source, provide a link to the Creative Commons license, and indicate if changes were made. 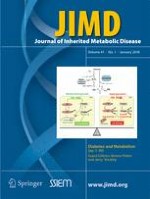 Investigating the link of ACAD10 deficiency to type 2 diabetes mellitus

Erratum to: The presence of anaemia negatively influences survival in patients with POLG disease

Phenotype, disease severity and pain are major determinants of quality of life in Fabry disease: results from a large multicenter cohort study