We aim to discuss the association of isolated atrophy of the abductor digiti quinti muscle in patients with rheumatoid arthritis as well as review the anatomy and imaging findings of this condition on MRI.

A consecutive series of 55 patients diagnosed with rheumatoid arthritis according to the 2010 ACR/EULAR classification criteria were recruited. MRI of the clinically dominant feet was performed using a 1.5-T scanner.

Prevalence of signs of abductor digiti quinti denervation on MRI was high in the studied population, suggesting that rheumatoid arthritis may be associated with inferior calcaneal nerve compression. 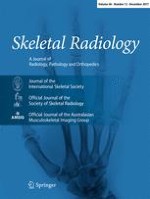 Ultrasound elastography in tendon pathology: state of the art

Magnetic resonance cinematography of the fingers: a 3.0 Tesla feasibility study with comparison of incremental and continuous dynamic protocols