In 2015, an H5N1 influenza virus was isolated from a pig in Zhejiang Province, Eastern China. This strain was characterized by whole-genome sequencing with subsequent phylogenetic analysis. Phylogenetic analysis showed that all segments from this strain belonged to clade 2.3.2 and that it had received its genes from poultry influenza viruses in China. A Glu627Lys mutation associated with pathogenicity was observed in the PB2 protein. This strain was moderately pathogenic in mice and was able to replicate without prior adaptation. These results suggest that active surveillance of swine influenza should be used as an early warning system for influenza outbreaks in mammals. 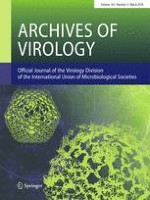 Identification of a new begomovirus infecting Duranta repens in Pakistan