Recently, anthelmintic resistance becomes a growing problem in veterinary medicine in all domestic animals including camels. There was a little documented research on parasitic resistance especially in camels in Egypt. Therefore, this study was designed to investigate resistance to ivermectin in one-humped camels (Camelus dromedarius) in a private farm at Assiut Governorate, Egypt. These camels were regularly receiving injectable ivermectin at 0.2 mg/kg bodyweight once every month and suffered from emaciation and loss of condition. Fecal samples were collected from all camels in the farm (number = 40) and examined directly by sedimentation and flotation techniques. Fecal egg counts were also determined by using McMaster slide. Thirty-one out of 40 (77.5%) examined camels were infected with eggs of different helminth genera and coccidian oocysts. Eimeria spp. were the most prevalent (55%) either in single or mixed infested cases, followed by Trichostrongylus spp. (45%), Trichuris spp. (35%), Ascaris spp. (5%), and Moniezia spp. (5%). According to the infestation type, the infested cases divided into single and mixed cases. Single infested cases (n = 13; 32.5%) was lower than the mixed (two (9; 22.5%) or three (9; 22.5%)) ones. Severity of infestation was estimated by fecal egg count and most of cases showed mild infestation except for Eimeria spp.-infested cases, which showed severe infestation. The present study concluded that misuse of ivermectin as anthelmintic drug has led to the development of parasitic resistance in the examined camels especially with the nematode worm Trichostrongylus spp. 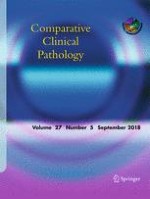 Gastrointestinal parasitic infection in laboratory rats: a challenge for researchers