Japanese Society for Cancer of the Colon and Rectum (JSCCR) guidelines 2016 for the treatment of colorectal cancer | springermedizin.de Skip to main content
TOOLBAR 1 2 3 4
SUCHE MENÜ 1 2 3 4

Preparation of these Guidelines was funded by the JSCCR. No financial support was received from any other organization or corporation. 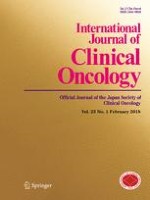 Aspirin use and head and neck cancer survival: an observational study of 11,623 person-years follow-up