2. How to use these guidelines

These guidelines have been as a result of consensuses reached by the Guideline Committee of the Japanese Society for Cancer of the Colon and Rectum, on the basis of careful review of evidence retrieved by literature searches and taking into consideration the medical health insurance system and clinical practice in Japan. They can, therefore, be used as a guide for treating colorectal cancer in clinical practice. More specifically, they can be used as a guide to obtaining informed consent from patients and choosing the method of treatment for each patient. However, these guidelines provide only general recommendations for choosing treatment strategies for colorectal cancer, and they do not control or limit treatment strategies or treatment methods that are not described herein. These guidelines can also be used as a document to explain the rationale for selecting treatment strategies and treatment methods that differ from those described in the guidelines.
Anzeige
The Japanese Society for Cancer of the Colon and Rectum (JSCCR) is responsible for the statements in these guidelines. However, the personnel directly in charge of treatment, not the JSCCR or the Guideline Committee, are responsible for the outcome of treatment.

The users of these guidelines are mainly clinical doctors engaged in all aspects of the medical treatment of colorectal cancer.

4. How to develop these guidelines

We adopted the concept from the first edition in which the treatment policy algorithm was disclosed and a simple explanation thereof provided, and added further comments with regard to categories requiring additional explanation. Since the 2009 edition, topics of debate have been raised as clinical questions (CQs) and included with recommendations added. In the 2014 edition, this practice was continued, with corrections and additions made to the CQs on the basis of knowledge acquired since the 2010 version.

2) Evidence level and strength of recommendations of CQs

Papers relating to the CQs were comprehensively collected and evidence in individual papers relating to critical outcomes included in the CQs was divided into groups by study design [ 2]. The literature level and the body of evidence (Table  1) were evaluated with reference to the GRADE (Grading of Recommendations Assessment, Development, and Evaluation) system [ 3– 25], before determining the final CQ evidence level (Table  2).
Table 1
Rating the quality of evidence
Table 2
Definition of levels of evidence [ 13]

Preparation of these guidelines was funded by the JSCCR. No financial support was received from any other organization or corporation.

The members of the Guideline Committee and the Guideline Evaluation Committee were from a diverse range of disciplines, including surgery, internal medicine, radiology, pathology, etc., to minimize the possibility of biased opinion. Each recommendation was determined not the basis of an individual opinion but on the basis of voting by all the committee members, with consensus prioritized.

1.
Endoscopic treatment (Fig.  1)
×
①
Endoscopic resection is intended for both diagnosis and treatment. It consists in total excisional biopsy in which curability and the need for additional intestinal resection are assessed by histopathological examination of the resected specimens (CQ-1).
②
En bloc resection is desirable for accurate diagnosis of the status of carcinoma invasion in the resection margin and the deepest area.
Note 1
Polypectomy. In this method, a snare is placed on the stalk of the lesion, and the lesion is electrocauterized by use of a high-frequency current. This method is mainly used for protruding lesions.
Note 2
EMR. In this method, the lesion is elevated by local injection of a liquid, for example physiological saline, into the submucosa, and the lesion is electrocauterized the same as in polypectomy. This method includes the snare method [ 28] and EMR using a cap (EMRC). It is mainly used for superficial tumors and large sessile lesions.
Note 3
ESD. In this technique, the lesion is elevated by local injection of a liquid, for example sodium hyaluronate solution, into the submucosa of the perilesional area; circumferential incision of the mucosa surrounding the lesion, dissection of the submucosa with a special knife, and en bloc resection are then performed [ 28]. ESD is mainly indicated for large tumors, especially for early cancers that cannot be resected by EMR.
2.
Surgical treatment (Fig.  2)
×

CQ-1: What are the indication criteria for additional treatment after endoscopic resection of pT1 (SM) [26]? (Fig. 10)

①
Surgical resection is preferable when the vertical margin is positive. (Recommendation/Evidence level 1C)
②
If any of the following findings is observed during histological examination of the resected specimen, intestinal resection with lymph node dissection is considered as an additional treatment. (Evidence level B)
(1)
Depth of SM invasion ≥1000 µm
(2)
Vascular invasion positive
(3)
Poorly differentiated adenocarcinoma, signet-ring cell carcinoma, or mucinous carcinoma [ 126]
(4)
Grade 2/3 budding at the site of deepest invasion [ 126]
×
The principle for treatment of pT1 (SM) carcinomas, which are invasive carcinomas, is intestinal resection with lymph node dissection. However, some pT1 (SM) carcinomas have a very low risk of metastasis, and the purpose of these criteria is to minimize the need for additional resections that eventually result in overtreatment of such patients. Although no diagnostic methods enable prediction of lymph node metastasis (pN) without fail, the risk of metastasis can be used as a basis for determining whether or not to perform additional treatment.
Factors such as the depth of submucosal invasion (SM invasion depth) [ 127], histological type, for example poorly differentiated adenocarcinoma, signet-ring cell carcinoma, and mucinous carcinoma [ 126], the presence of a poorly-differentiated area and muconodules at the site of deepest invasion, budding, and vascular invasion, have been reported to be risk factors for regional lymph node metastasis by pT1 (SM) carcinoma [ 126, 128].
These criteria for determining whether additional treatment is indicated were prepared on the basis of 3 criteria for performing additional intestinal resection of pT1 (SM) carcinoma described in the “Japanese Classification of Colorectal Carcinoma” (2nd edition, 1980):
(1)
obvious intravascular carcinoma invasion;
(2)
poorly differentiated adenocarcinoma or undifferentiated carcinoma; or
(3)
massive carcinoma invasion extending to the vicinity of the margin [ 129].
The description of “massive carcinoma invasion” in the 4th edition of the “Japanese Classification of Colorectal Carcinoma” was revised to a more specific description in the 5th edition (1994): “Invasion deeper than ‘very shallow invasion’ (e.g., invasion exceeding approximately 200 μm to 300 μm)” [ 130].
Subsequent case series studies in Japan have shown that “200 μm to 300 μm” can be extended to 1000 μm [ 131]. According to the results of the project study by the JSCCR, the incidence of lymph node metastasis for colorectal carcinoma with an SM invasion depth of 1000 μm or more was 12.5 % (Table  14) [ 127, 131]. However, not all cases with submucosal invasion deeper than 1,000 μm necessarily require additional surgery. Approximately 90 % of patients with a depth of invasion of 1000 μm or more did not have lymph node metastasis, and it is important to determine whether additional treatment is indicated after sufficiently considering other factors in addition to depth of SM invasion, for example whether other risk factors for lymph node metastasis are present, the physical and social background of the patient, and the patient’s wishes. As consensus has not yet been achieved within the Guideline Committee, indicators of strength of recommendation in the treatment criteria provided above have not been disclosed. Because budding was demonstrated to be an important risk factor for lymph node metastases in the project study by the JSCCR, additional intestinal resection has been added to the list of factors that should be considered according to the previous edition. Furthermore, project research is currently in progress into other histopathological factors. Multi-center joint research projects have produced reports providing results from consideration of the appropriateness of these criteria [ 132– 134]. None of the guidelines in other countries includes depth of invasion or budding as criteria for additional treatment.
Table 14
Depth of invasion of SM cancer and lymph node metastasis (modified from Ref. [ 127])
The incidence of lymph node metastasis among patients with a depth of invasion of 1000 μm or above was 12.5 %
All 3 lymph node metastasis-positive patients with head invasion were ly positive

CQ-2: What are the criteria for selecting endoscopic resection with regard to lesions with a maximum diameter of 2 cm or greater?

When it is possible to identify or estimate the location of the muscularis mucosae, depth of SM invasion is measured from the lower border of the muscularis mucosae of the lesion, irrespective of macroscopic type.
[Definition of tumor budding] [ 126] A cancer cell nest consisting of 1 or less than 5 cells that infiltrates the interstitium at the invasive margin of the cancer.
[Grade of budding] After selecting one field in which the number of budding is greatest, the number of buddings is counted in a field measuring 0.785 mm 2 observed through a 20× objective lens (WHK 10× ocular lens). Depending on the number of buddings, grade of budding is defined as:

CQ-3: What cautions should be noted when using colorectal ESD to implement endoscopic resection of colonic lesions?

CQ-5: Resection of the primary tumor for patients with unresectable distant metastases

CQ-7: What are the indications for resection for cases in which metastasis is simultaneously noted in the liver and the lungs?

CQ-9: Is resection of liver/lung metastasis effective, if it becomes possible as a result of the effects of chemotherapy?

CQ-10: What are the surgical indications in cases of local recurrence of rectal cancer?

CQ-12: Is heat coagulation therapy effective with regard to liver metastatic lesions?

①
There are few reports indicating the efficacy of heat coagulation therapy; it is, therefore, not recommended as a first choice of treatment. (Recommendation/Evidence level 1C)
②
Because heat coagulation therapy is accompanied by a high risk of local recurrence in cases of liver metastasis, resection should be initially considered wherever possible.

CQ-13: Is postoperative adjuvant chemotherapy effective for patients aged 70 or over?

CQ-15: Is the appropriate duration of postoperative adjuvant chemotherapy 6 months?

Side Memo 2
SN-38 is an active metabolite of IRI and the UGT1A1 gene encodes an intrahepatic metabolizing enzyme which converts the active form SN-38 to the inactive form SN-38 G. Among patients who are double heterozygotes for *6 and *28 or homozygotes for *6 or *28 of the UGT1A1 gene, the glucuronic acid conjugation capacity of UGT1A1 is known to be reduced and metabolism of SN-38 to be delayed, and serious adverse drug reactions, for example neutropenia, may occur as a result. It is especially desirable to test for a UGT1A1 genetic polymorphism before administering IRI to patients with a high serum bilirubin level, elderly patients, patients whose general condition is poor (e.g., PS2), and patients for whom severe toxicity (especially neutropenia) developed after the last administration of IRI. On the other hand, because IRI toxicity cannot be predicted with certainty on the basis of the presence of a UGT1A1 genetic polymorphism alone, it is essential to monitor patients’ general condition during treatment and to manage adverse drug reactions carefully, irrespective of whether a genetic polymorphism is detected.

CQ-18: Is preoperative chemoradiotherapy effective in patients with rectal cancer?

①
In cases of locally advanced and locally recurrent rectal cancer determined likely to become R0 resectable as a result of tumor shrinkage after treatment, it is recommended that chemoradiotherapy, with the objective of resection, be used as opposed to radiotherapy alone. (Recommendation/Evidence level 1B)
②
Chemoradiotherapy should also be taken into consideration where the objective is relief of symptoms. (Recommendation/Evidence level 1C)

①
Metachronous colorectal cancer occurs more frequently in cases of colorectal cancer resection than in the general population, and, as such, regular endoscopic examination of the colon is recommended. (Recommendation/Evidence level 1B)
②
There is no indication that post-surgical surveillance targeting multiple cancers is effective. The appropriate course of action is to educate the patient regarding the need for regular cancer examinations and recommend periodic checkups. (Recommendation/Evidence level 2C) 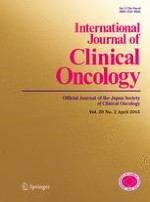 Expression of costimulatory molecules B7-H1, B7-H4 and Foxp3+ Tregs in gastric cancer and its clinical significance