The incorrect restoration of the joint line during TKA can result in joint instability, anterior knee pain, limited range of motion, and joint stiffness. The joint line level is usually measured only on pre- and post-operative radiographs. Current knee navigation systems can now potentially support intra-operatively joint line restoration by controlling the exact amount of the bone-cartilage removed and the corresponding overall thickness of the components implanted. The aim of this study was to assess how well the joint line level is restored and the tibiofemoral overstuffing prevented when standard knee surgical navigation is used carefully also with these purposes. Intra-operative measurements during navigated TKA were taken.

Sixty-seven primary TKAs were followed prospectively. The variation before and after prosthesis component implantation of the joint line level, both in the femoral and tibial reference, was measured intra-operatively by an instrumented probe. Overstuffing was measured as the difference between the overall craniocaudal thickness of the femoral and tibial prosthesis components inserted and the thickness of the bone-cartilage removed.

A significant elevation in the joint line level after prosthesis implantation was found with respect to the tibial reference (1.9 ± 2.4 mm, mean ± SD), very little to the femoral reference (0.3 ± 2.1 mm), perhaps accounted for the femur-first operative technique utilized. Overstuffing was on the average of 2.2 ± 3.0 mm.

These results suggest that a knee navigation system can also support well a proper restoration of the joint line level and limit the risk of overstuffing when relevant measurements are taken carefully during operation. 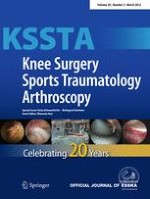 Definition and classification of early osteoarthritis of the knee