Kallikrein-related peptidases 6 and 10 are elevated in cerebrospinal fluid of patients with Alzheimer’s disease and associated with CSF-TAU and FDG-PET | springermedizin.de Skip to main content
TOOLBAR 1 2 3 4
SUCHE MENÜ 1 2 3 4

Alterations in the expression of human kallikrein-related peptidases (KLKs) have been described in patients with Alzheimer’s disease (AD). We elucidated the suitability of KLK6, KLK8 and KLK10 to distinguish AD from NC and explored associations with established AD biomarkers.

KLK levels in cerebrospinal fluid (CSF), as determined by ELISA, were compared between 32 AD patients stratified to A/T/(N) system with evidence for amyloid pathology and of 23 normal controls with normal AD biomarkers. Associations between KLK levels and clinical severity, CSF and positron emission tomography (PET) based AD biomarkers were tested for. 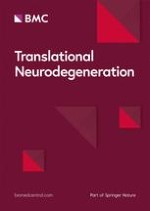