Erythropoietin (EPO) is mainly synthesized within renal peritubular fibroblasts, and also other tissues such as the liver possess the ability. However, to what extent non-kidney produced EPO contributes to the hypoxia-induced increase in circulating EPO in adult humans remains unclear.

We aimed to quantify this by assessing the distribution of EPO glycoforms which are characterized by posttranslational glycosylation patterns specific to the synthesizing cell. The analysis was performed on samples obtained in seven healthy volunteers before, during and after 1 month of sojourn at 3,454 m altitude.

Umbilical cord (UC) plasma served as control. As expected a peak (p < 0.05) in urine (2.3 ± 0.5-fold) and plasma (3.3 ± 0.5-fold) EPO was observed on day 1 of high-altitude exposure, and thereafter the concentration decreased for the urine sample obtained after 26 days at altitude, but remained elevated (p < 0.05) by 1.5 ± 0.2-fold above the initial sea level value for the plasma sample. The EPO glycoform heterogeneity, in the urine samples collected at altitude, did not differ from values at sea level, but were markedly lower (p < 0.05) than the mean percent migrated isoform (PMI) for the umbilical cord samples.

Our studies demonstrate (1) UC samples express a different glycoform distribution as compared to adult humans and hence illustrates the ability to synthesis EPO in non-kidney cells during fetal development (2) as expected hypoxia augments circulating EPO in adults and the predominant source here for remains being kidney derived. 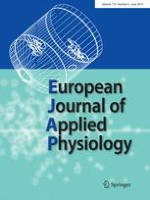 Inflammatory responses of older Firefighters to intermittent exercise in the heat

A single-session testing protocol to determine critical power and W′