Ten 3D femur-cartilage models were created by combining computer tomographic (CT) and laser scans of native human cadaveric femurs. Three femoral component designs were positioned using KA and MA. Measurements of the prosthetic and native trochlea were made along the arc length of the native trochlear groove. The alignment technique with the smaller absolute difference between prosthetic and native for the medial–lateral and radial locations of the groove and sulcus angle of the trochlea more closely restored the native trochlea.

KA more closely restored the native trochlea, which explains why the reported risk of patellofemoral complications for KA is not higher than MA according to five randomized clinical trials. Small design modifications of the medial–lateral and radial locations and sulcus angle are strategies for restoring the native trochlea. Such modifications might further reduce the risk of patellofemoral complications. 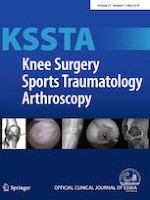 Correction to: No difference in mid-term survival and clinical outcome between patient-specific and conventional instrumented total knee arthroplasty: a randomized controlled trial