To evaluate the kinetics of peripheral vascularisation, central vessel regression and neovascularisation in the OIR mouse model in order to: i) generate standard kinetics for further studies in this model, and ii) define optimal time points to investigate cellular mechanisms of retinal vascular plasticity.

From postnatal day 7 (P7) until P12, newborn mice were kept at 75% oxygen. The animals were sacrificed on different time points, during and after O2 exposure. After intracardial perfusion with FITC–dextran, retinal flatmounts were prepared, and the size of the retinal vascular network, the size of the central avascular area, and the number of blood vessel tufts and clusters were determined. In addition to the fluorescein stain for perfused capillaries, endothelial cells were stained with isolectin.

Upon O2 exposure, there is a rapid depletion of capillaries starting adjacent to the large central arteries. These avascular stripes fuse to form an avascular central area which amounts to 37% of the whole retinal surface after 2 days of hyperoxia. The peripheral capillary network remains intact throughout the incubation period, even though the pace of its centrifugal spreading is decelerated compared to room air controls. Already during O2 exposure, revascularisation of the central avascular area is initiated by peripheral vessels sprouting in a centripetal direction. Revascularisation is accelerated after the return to room air, and is completed at P25. Maximal pathological neovascularisation can be found at P17, at the border between the avascular and vascular retina.

Hyperoxia leads to a rapid development of a central avascular area of the retina, with its maximum during not at the end of the hyperoxic phase. Central capillary loss and peripheral vascularisation take place simultaneously, indicating different cellular control mechanisms for different areas of the retina. These standard kinetics for peripheral vascularisation and central vessel regression will: 1) help to compare the effects of angio-modulation, and 2) serve as normal baseline for the characterization of knock-out mice strains with regard to gene-specific vascular changes in the OIR-model. 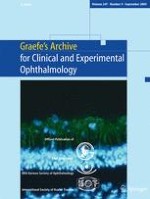 Visualizing vitreous in vitrectomy by triamcinolone