This is a cross-sectional study in which 2,585 respondents aged 15–49 years from 30 riparian communities along the lower arm of the Volta lake were interviewed using a structured questionnaire; 24 focus group discussions were also conducted. Descriptive statistics were used to determine the frequency of responses for each question posed and Chi squared tests used to determine the associations between demographic variables and variables of interest. Binary logistic regression was used to predict the probability of a reported symptom as an indicator of urogenital schistosomiasis. Thematic analysis was used to examine narratives.

Ninety four percent of male respondents and 88.7 % of female respondents acknowledged schistosomiasis as a water-borne disease. Only 207 out of 1,096 subjects (18.9 %) responding to questionnaire agreed to the knowledge that urogenital schistosomiasis can have reproductive health implications. A significant difference in variation in this knowledge was found between males (14.5 %) and females (7.2 %) (p = 0.001). The study also found that, although knowledge on HIV was high, only 12.3 % of respondents knew that urogenital schistosomiasis could facilitate the acquisition of HIV. Women who reported to have ever suffered schistosomiasis were 1.3 and 1.5 times more likely to report vaginal discharge and vaginal itch. Sexual dysfunction (11.1 %) and urethral discharge (10.6 %) were the most frequently reported symptoms among males. 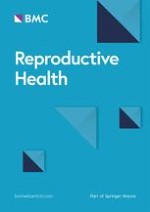 Clinical and perceived quality of care for maternal, neonatal and antenatal care in Kenya and Namibia: the service provision assessment

Prevalence of depressive symptoms in pregnant and postnatal HIV-positive women in Ukraine: a cross-sectional survey

Erratum to: ‘Tocolysis for inhibiting preterm birth in extremely preterm birth, multiple gestations and in growth-restricted fetuses: a systematic review and meta-analysis’

Validation of a symphysis-fundal height chart developed for pregnancy complicated by diabetes and hyperglycemia: an observational study

Global, regional and national levels and trends of preterm birth rates for 1990 to 2014: protocol for development of World Health Organization estimates