The etiology of schizophrenia is still unclear. It is well-known that pro-inflammatory cytokines are higher in schizophrenia patients since the first episode psychosis comparing to healthy controls. Inflammatory downstream cascades influence different cellular pathways, like the displacement of the tryptophan (TRP) metabolism to the production of kynurenine (KYN) instead of serotonin, which results in the generation of several neuro and immunoactive metabolites. The aim of this study was to determine TRP, KYN and IL-1β plasma levels in first-onset schizophrenia (n = 28) and healthy controls (n = 30). The plasmatic levels of TRP and KYN were decreased in schizophrenic patients (p = 0.004 and p = 0.002, respectively), but there was no difference in the ratio of KYN/TRP (p = 0.554) or either in IL-1β (p = 0.101). Positive correlation was observed between KYN and IL-1β only in the schizophrenia group (r = 0.461, p = 0.021). And, there was also positive correlation between KYN and Positive and Negative Symptoms Scale (PANSS) (r = 0.395, p = 0.037). There is no correlation between the other analytes and other parameters of PANSS. Although our results of KYN have been different than expected and there was no difference in the KYN/TRP ratio, we observed a positive correlation between IL-1β and KYN, corroborating findings that pro-inflammatory agents hold up the KYN pathway. 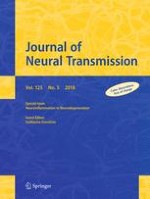 Differential contribution of microglia and monocytes in neurodegenerative diseases

In vivo PET imaging of neuroinflammation in Alzheimer’s disease