The present study examined the longitudinal association and interaction between lack of engaging in physical activity (PA) and presence of neuropsychiatric symptoms (NPS) with the risk of incident mild cognitive impairment (MCI). The authors conducted a prospective cohort study in the setting of the population-based Mayo Clinic Study of Aging in Minnesota, USA, involving 3083 cognitively unimpaired persons aged ≥ 50 years (1570 males; median age, 74 years). Predictors included: lack of engaging in light, moderate, and vigorous intensity PA within 1 year of baseline assessment as measured by a self-reported questionnaire; and presence of NPS (agitation, anxiety, apathy, appetite change, sleep/nighttime disturbance, depression, irritability, clinical depression, clinical anxiety) as measured by standardized tools. When the authors detected a statistically significant interaction, they compared the risk of incident MCI between four groups of participants (no NPS/engaging in PA = reference group; NPS/engaging in PA; no NPS/not engaging in PA; NPS/not engaging in PA) by calculating hazard ratios (HR) and 95% confidence intervals (CI) using Cox proportional hazard models adjusted for age (as time scale), sex, education, global cognition, medical comorbidities, and apolipoprotein E ɛ4 status. After a median follow-up of 6.3 years, 599 participants developed incident MCI. Not engaging in vigorous intensity PA and having sleep/nighttime disturbance (HR [95% CI], 1.61 [1.07, 2.43]; p = 0.021), clinical depression (1.98 [1.34, 2.92]; p < 0.001) or clinical anxiety (1.63 [1.11, 2.41]; p = 0.013) was associated with an increased risk of incident MCI as compared to the reference group. Thus, the combined presence of lack of vigorous intensity physical activity with sleep/nighttime disturbance behavior, clinical depression, or clinical anxiety was greater than the expected arithmetic sum of their independent effects. Neuropsychiatric symptoms appear to be a stronger driving force of incident MCI than lack of physical activity.

This prospective cohort study was conducted in the setting of the ongoing, population-based Mayo Clinic Study of Aging (MCSA) in Olmsted County, Minnesota, USA (Roberts et al., 2008). At baseline, 3083 cognitively unimpaired individuals aged ≥ 50 years with available information on physical activity within the preceding 1 year, presence or absence of neuropsychiatric symptoms, and data available on covariates were included. Participants were then followed forward in time for a median of 6.3 years to the outcome of incident MCI. The MCSA protocols have been approved by the institutional review boards (IRB) of the Mayo Clinic and Olmsted Medical Center in Rochester, MN, USA. All participants provided written informed consent.

Physical activity within the previous year was measured at baseline using a self-reported questionnaire (Geda et al., 2010). The questionnaire was derived from two validated instruments, the 1985 National Health Interview Survey and the Minnesota Heart Survey intensity codes (Folsom et al., 1985; National Center for Health Statistics (U.S.), Moss, & Parsons, 1986). The questionnaire distinguished between three intensity levels and provided examples of physical activities for each level: (1) light physical activity such as leisurely walking or slow dancing; (2) moderate physical activity such as hiking or swimming; and (3) vigorous physical activity such as jogging or playing tennis singles. Participants were asked to provide information about the frequency with which they carried out these activities: ≤ 1 time per month, 2–3 times per month, 1–2 times per week, 3–4 times per week, 5–6 times per week, and daily. If a participant engaged in more strenuous activity more often than light activity, then their light activity was adjusted to be the same amount of times as the more strenuous activity. The same adjustment was made for moderate activity. This was done to avoid misleading results as someone may report not engaging in light activity, for example, and at the same time, be doing a lot of moderate or vigorous activity. If we did not make this adjustment, this person would appear sedentary in the light activity analyses, when this is not the case. Furthermore, if a participant reported engaging in physical activity at a given intensity level 2–3 times/month or less within 1 year of baseline assessment, then this was considered as not engaging in/lack of physical activity. Previous research has shown that the physical activity questionnaire used in the MCSA has moderate to good internal consistency, and test–retest correlation coefficients range between 0.33 for vigorous intensity activity and 0.50 for moderate intensity activity (Geda et al., 2010).

Neuropsychiatric symptoms were assessed using the Neuropsychiatric Inventory Questionnaire (NPI‑Q; [Kaufer et al., 2000]). The NPI‑Q was administered as a structured interview to an informant by a study coordinator and assessed the presence/absence of 12 emotional behaviors (i.e., depression, anxiety, apathy, agitation, delusions, hallucinations, euphoria, disinhibition, irritability, aberrant motor behavior, sleep/nighttime disturbance behavior, and eating/appetite). In addition, self-reported neuropsychiatric symptoms were assessed using the Beck Depression Inventory (BDI–II; [Beck, Steer, & Brown, 1996]) and Beck Anxiety Inventory (BAI; [Beck & Steer, 1990]). The BDI–II measures common symptoms of depression, such as feelings of guilt or loss of interest, over the preceding 2 weeks. The BAI measures common anxiety symptoms, such as nervousness or fear of losing control, over the preceding week. Both inventories are validated and have 21 items. The severity of each item is rated on a Likert-type scale ranging from 0 to 3, with the total score thus ranging from 0 to 63. A higher score indicates higher severity of depressive and anxiety symptoms, respectively.

Support for this research was provided by NIH grants: National Institute on Aging (R01 AG057708; U01 AG006786; P50 AG016574; R01 AG034676), and National Institute of Mental Health (K01 MH068351). This project was also supported by the Robert Wood Johnson Foundation, the Robert H. and Clarice Smith and Abigail Van Buren Alzheimer’s Disease Research Program, the GHR Foundation, the Mayo Foundation for Medical Education and Research, the Edli Foundation, and the Arizona Alzheimer’s Consortium.

W.K. Kremers receives research funding from the Department of Defense, NIH, Astra Zeneca, Biogen, and Roche. M.M. Machulda receives research funding from the NIH. M.M. Mielke served as a consultant to Eli Lilly, received unrestricted research grants from Biogen, Lundbeck, and Roche, and receives research funding from the NIA, NIH, and the Department of Defense. D.S. Knopman serves on a Data Safety Monitoring Board for the Dominantly Inherited Alzheimer Network (DIAN) study and is an investigator in clinical trials sponsored by Biogen, Lilly Pharmaceuticals, and the University of Southern California. R.C. Petersen consults for Roche Inc, Merck Inc, Genentech Inc, Eisai, Inc, Biogen Inc, and GE Healthcare and receives royalties from Oxford University Press for the publication of Mild Cognitive Impairment. M. Vassilaki received research funding from Roche, and currently receives research funding from NIH and Biogen. She has equity ownership in Abbott Laboratories, Johnson and Johnson, Medtronic, and Amgen. Y.E. Geda receives funding from the NIH and Roche and served on the Lundbeck Advisory Board. J. Krell-Roesch, J.A. Syrjanen, J. Bezold, S. Trautwein, B. Barisch-Fritz, and A. Woll declare that they have no competing interests.
Anzeige
All procedures performed in studies involving human participants or on human tissue were in accordance with the ethical standards of the institutional and/or national research committee and with the 1975 Helsinki declaration and its later amendments or comparable ethical standards. Informed consent was obtained from all individual participants included in the study.
Open Access This article is licensed under a Creative Commons Attribution 4.0 International License, which permits use, sharing, adaptation, distribution and reproduction in any medium or format, as long as you give appropriate credit to the original author(s) and the source, provide a link to the Creative Commons licence, and indicate if changes were made. The images or other third party material in this article are included in the article’s Creative Commons licence, unless indicated otherwise in a credit line to the material. If material is not included in the article’s Creative Commons licence and your intended use is not permitted by statutory regulation or exceeds the permitted use, you will need to obtain permission directly from the copyright holder. To view a copy of this licence, visit http://​creativecommons.​org/​licenses/​by/​4.​0/​.
insite
INHALT
download
DOWNLOAD
print
DRUCKEN 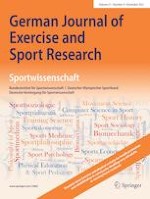 Assessing the well-being of residents in nursing facilities

Evaluation of the instrumented Timed Up and Go test as a tool to measure exercise intervention effects in nursing home residents: results from a PROCARE substudy

The Lifestyle-integrated Functional Exercise (LiFE) program and its modifications: a narrative review