The goal was to investigate whether the three-dimensional (3D) reliability of the landmarks defining the Frankfort horizontal plane (FH) can be enhanced by reducing variance with the help of nearby anatomical structures.

Twenty multislice computed tomography (MSCT) datasets of evidently symmetrical patients (11 female and 9 male patients, 6.1–16 years old) were selected from 695 datasets archived at our department. In the 3D reconstructions, we located the anthropometric landmarks orbitale and porion, then these were modified with the help of frontomalare temporale, radiculare and the most anterior border of the left and right external acoustic pore. The resultant orbitale* and porion* reference points for the Frankfort horizontal plane were then compared to the original landmarks. Statistical analysis was performed.

The superior reliability in the sagittal y-axis and in the transversal x-axis of the new reference points was confirmed. Based on the covariance matrices, the mean maximum standard deviation (square root of the maximum eigenvalue) in the direction of maximum variance was reduced from 0.77/0.94 mm to 0.47/0.48 mm for left/right orbitale, and similar reductions from 0.85/0.92 mm to 0.29/0.30 mm were noted for left/right porion (p < 0.001 for all four points). Vertical reliability did not improve further.

The modifications significantly reduced the variance of the orbitale and porion landmarks, thus, clearly increasing the three-dimensional reliability. Hence these optimized reference points are better suited to construct the FH, which arguably is an important spatial reference plane in orthodontics.
Anzeige 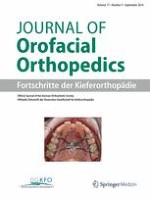 Dental calcification stages as determinants of the peak growth period