Laparoscopic pancreaticoduodenectomy (LPD) is a complex procedure that is becoming increasingly popular among surgeons. Postoperative pancreatic fistula (POPF) remains the most feared specific complication in reconstruction after PD. The Blumgart anastomosis (BA) has been established as one of the safest anastomosis for pancreas remnant reconstruction, with low rates of POPF and postoperative complications. The procedure for performing this anastomosis by laparoscopic approach has not been reported to date.

We describe our technique of LPD with laparoscopic-adapted BA (LapBA) and present the results obtained. A case-matched analysis with open cases of BA is also reported.

Since February 2013 to February 2016, thirteen patients were operated of LapBA. An equivalent cohort of open PD patients was obtained by matching sex, ASA, pancreas consistency and main pancreatic duct diameter. Severe complications (grades III–IV) and length of stay were significantly lesser in LapBA group. No differences in POPF, readmission, reoperation rate and mortality were detected.

The LapBA technique we propose can facilitate the pancreatic reconstruction after LPD. In this case-matched study, LPD shows superior results than open PD in terms of less severe postoperative complications and shorter length of stay. Randomized control trials are required to confirm these results. 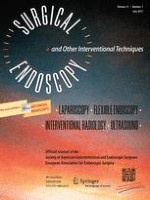 The outcomes of initial endoscopic transluminal drainage are superior to percutaneous drainage for patients with infected pancreatic necrosis: a prospective cohort study