Local recurrence of rectal cancer occurs as frequently as liver or lung metastases [ 1]. Its treatment can be challenging [ 2] and it impairs quality of life (QOL) with severe pelvic pain, foul-smelling discharge, and neurological disturbance, including tenesmus and incontinence. The Japanese Clinical Oncology Group reported on an RCT that evaluated mesenteric excision (ME) alone vs. ME plus prophylactic lateral pelvic lymph node dissection (LPLND) in patients with cStage II–III low rectal cancer without evident enlargement of the lateral nodes [ 3]. The 5-year relapse-free survival, being the primary endpoint of the study, was similar in the ME with LLND group and the ME alone group (73.4% and 73.3%, respectively), although the study failed to demonstrate non-inferiority of ME alone. Importantly, the study found a higher local recurrence rate of 12.6% after ME alone vs. 7.4% after ME with LPLND ( p = 0.024). These data clearly showed the oncological benefit of LPLND for reducing local recurrence of cStage II–III low rectal cancer even without suspicious lateral nodes. That study also identified longer operation times, greater blood loss, and a marginally higher rate of grade 3/4 complications in the ME with LLND group than in the ME alone group (21.7% vs. 16.0%, respectively; p = 0.07) [ 4]. Sexual and urinary dysfunctions were not different in the two groups [ 5, 6].
In Western countries, neoadjuvant chemoradiotherapy/radiotherapy (NACRT/RT) followed by total mesorectal excision (TME) is standard treatment for cStage II–III rectal cancer [ 7– 9]. Although the overall local recurrence rate with this strategy is 5% to 10% [ 10, 11], it has been demonstrated that patients with lateral nodal enlargement have a higher rate of local recurrence of up to 30% without LPLND [ 11]. With improved local control in the central pelvis by NACRT/RT and TME, there is emerging global attention on how to deal with lateral nodal disease as a major cause of local recurrence (Fig.  1) [ 11, 12]. With recent technical improvements in minimally invasive surgery, studies have demonstrated the safety and feasibility of LPLND through a minimally invasive approach [ 13, 14]. In this article, we review recent evidence on the management of lateral nodal disease in rectal cancer and technical improvements in LPLND, with particular focus on laparoscopic and robotic LPLND.
×
Anzeige
Indications for selective lateral node dissection after neoadjuvant therapy. Lateral nodal disease is a major cause of local recurrence after NACRT/RT. In a study from Korea, the local recurrence rate after NACRT and TME reached 26.6% of patients with lateral nodes ≥ 5 mm in diameter and 68.8% of patients with lateral nodes ≥ 10 mm in diameter [ 15]. A multicenter international study found that lateral local recurrence rates after NACRT/RT in patients with enlarged lateral nodes (≥ 7 mm) were significantly lower in patients who underwent TME plus LPLND than in those who underwent TME alone (5.7% vs. 19.5%, respectively; P = 0.042) [ 11]. These data suggest that preoperative CRT/RT is not sufficient to eliminate lateral nodal disease and that selective LPLND combined with preoperative CRT/RT should be considered for patients with lateral nodal disease.
Although the initial size of the lateral nodes before neoadjuvant therapy remains the gold standard for predicting lateral nodal disease [ 16], the role of post-treatment nodal size remains controversial. Akiyoshi et al. reported that a short-axis diameter of ≥ 8 mm in the lateral nodes before NACRT, female sex, and NACRT without induction chemotherapy was independently predictive of residual disease in the lateral nodes at final pathology, but that post-treatment size was not predictive [ 17]. In contrast, Ogura et al. reported the prognostic importance of the post-treatment size of the lateral nodes on restaging magnetic resonance imaging (MRI) after NACRT. Patients with post-treatment lateral nodes < 4 mm had no lateral local recurrence, whereas those with nodes ≥ 7 mm and/or internal iliac nodes ≥ 5 mm had a 5-year lateral local recurrence rate of 52.3% [ 12]. The authors suggested that LPLND could be avoided for patients with lateral nodes that shrink with treatment.
In addition to node size, Brown et al. showed that the signal intensity and border characteristics of the nodes on MRI were associated with mesorectal nodal involvement [ 18]. The Mercury Study Group reported that patients with features suspicious of lateral node metastasis on pretreatment MRI, such as a spiculated border and mixed signal intensity, had worse 5-year disease-free survival than other patients (31% vs. 76%, respectively; P = 0·001) [ 19]. These findings suggest that malignant characteristics on MRI could add diagnostic value to the prediction of metastasis. Sex, T stage, histopathological grade, regional lymph node status, PET-CT status, and preoperative induction systemic chemotherapy are potential additional predictive factors to consider instead of the model based on MRI findings alone [ 17, 20, 21].

Multiple recent studies have been published on the feasibility of laparoscopic LPLND, short-term outcomes of which have been reported, mainly from Asian countries, since 2011 (Table 1) [ 13, 22– 24]. Although these studies were retrospective case series, the short-term outcomes were reasonable, with median estimated blood [ 25] loss of 25–213 mL and rates of conversion of 0–17%. Yamaguchi et al. reported a multicenter case-matched study that compared laparoscopic and open LPLND for stage II or III low rectal cancer [ 26]. They found that the laparoscopic group had a longer operation time (474 min vs. 363 min), less blood loss (213 mL vs. 775 mL), less blood transfusion (6.8% vs. 22.2%), similar rates of grade III or IV complications (23.7% vs. 22.9%), and no mortality. Data on the long-term oncologic outcomes of this procedure are relatively limited. A case series of 107 patients who underwent laparoscopic LPLND after NACRT at a single cancer center in Japan reported 95.8% 3-year overall survival, 84.7% 3-year relapse-free survival, and a 3.2% 3-year local recurrence rate [ 27]. The patients in that series all had cT3/4 extraperitoneal low rectal cancer with clinically positive lateral nodes; therefore, these data support the oncologic rationale for performing this procedure. A retrospective multicenter case-matched study from Japan, comparing laparoscopic and open LPLND reported 93.9% 3-year overall survival, 93.9% 3-year local recurrence-free survival, and 80.3% 3-year relapse-free survival in the laparoscopic group. These values were all similar to or better than those for the open group [ 26]. Although prospective validation studies are warranted, these outcomes indicate the technical safety and feasibility of laparoscopic LPLND.
Table 1
Laparoscopic lateral pelvic lymph node dissection for rectal cancer
N/A Not assessed
Anzeige

Robotic LPLND was first described by Park et al., who reported a series of eight patients [ 29], since when other authors have documented their results (Table 2) [ 30– 35]. Robotic surgery has the advantages of using multi-joint forceps with a motion scaling, high-quality three-dimensional camera and greatly improved ergonomics, which are all ideal for complex procedures such as LPLND. Yamaguchi et al. reported the short- and long-term oncological outcomes of robotic vs. open LPLND [ 32, 34]. Robotic LPLND was associated with less blood loss (25 mL vs. 637 mL, P < 0.001), less need for blood transfusion (0% vs. 10.2%, P = 0.003), longer operative time (455 min vs. 410 min, P = 0.007), and fewer postoperative complications (wound infection 0% vs. 8.0%, P = 0.014; small bowel obstruction 3.5% vs. 15.9%, P = 0.009; anastomotic leakage 0% vs. 9.1%, P = 0.007; urinary retention 18.8% vs. 36.4%, P = 0.011) than the open procedure. That study also reported similar 5-year overall survival rates (95.4% vs. 87.8%, respectively; P = 0.106) and 5-year relapse-free survival rates (79.1% vs. 69.9%, P = 0.157) for robotic LPLND and the open procedure, but noted that robotic LPLND had superior 5-year local relapse-free survival (98.6% vs. 90.9%, P = 0.029). Kim et al. compared the short-term outcomes of robotic vs. laparoscopic LPLND [ 35]. Whereas the operative time was similar in the two groups, the estimated blood loss and the incidence of Foley catheter reinsertion for urinary retention after surgery were lower in the robotic group. Overall and local recurrence rates did not differ between the groups. Although there is limited evidence directly comparing robotic and laparoscopic LPLND, a robotic approach is generally regarded as a reasonable alternative for this complicated procedure, particularly in Western countries where LPLND is not standard.
Table 2
Robotic lateral pelvic lymph node dissection for rectal cancer
N/A Not assessed

The technical procedures of laparoscopic LPLND are well established and have been standardized by multiple authors [ 13, 36]. The important advantage of laparoscopic LPLND is a better surgical view within the deep pelvis, which allows for identification of the pelvic vessels and autonomic nerves (Fig.  2a). Typically, LPLND should be performed after completion of TME and before anastomosis. No additional trocars are needed after TME. The obturator and internal iliac nodes are the most important to dissect because they cover most of the curable lateral node metastasis from rectal cancer. To dissect these two areas, three planes should be recognized: the lateral pelvic wall plane, which is composed of the psoas and internal obturator muscles; the medial plane, composed of the ureter and the pelvic plexus; and the dorsal plane, composed of the internal iliac vessels and the sciatic nerve (Fig.  2b). These three planes surround the area to be dissected. Another important plane divides the area into the obturator and internal iliac compartments: the vesicohypogastric fascia, composed of the bladder, internal iliac artery, and the urinary branches (the umbilical and superior vesical and inferior vesical arteries; Fig.  2c). Dissection along these planes minimizes bleeding and prevents incomplete dissection in LPLND.
×

In the era of NACRT/RT, selective LPLND provides oncological benefits to patients with suspicious lateral nodes, particularly for reducing local recurrence. Careful patient selection and the appropriate use of minimally invasive surgery have the potential to improve short-term and long-term outcomes. Further studies are warranted to promote the minimally invasive approach for LPLND, including its technical feasibility in a larger dataset, complication profiles, leaning curve, continence, urinary/sexual function, and oncologic long-term outcomes.

We have no conflicts of interest to declare.
Open AccessThis article is licensed under a Creative Commons Attribution 4.0 International License, which permits use, sharing, adaptation, distribution and reproduction in any medium or format, as long as you give appropriate credit to the original author(s) and the source, provide a link to the Creative Commons licence, and indicate if changes were made. The images or other third party material in this article are included in the article's Creative Commons licence, unless indicated otherwise in a credit line to the material. If material is not included in the article's Creative Commons licence and your intended use is not permitted by statutory regulation or exceeds the permitted use, you will need to obtain permission directly from the copyright holder. To view a copy of this licence, visit http://​creativecommons.​org/​licenses/​by/​4.​0/​. 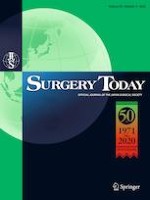