Between November 2004 and June 2007, 47 patients with AGC underwent LADG at our hospital, and 45 of those patients were enrolled in this study. These patients were compared with 83 patients who had AGC and underwent conventional open distal gastrectomy (ODG) during the same period. 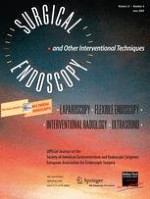 Trials and tribulations in the history of surgical innovation: SAGES 2007 presidential address