With the introduction of a self-expanding, memory-containing, circular hernia patch, surgeons have been enthusiastic about its use to repair ventral hernias smaller than 3 cm in diameter. The aim of this study was to evaluate the efficiency, reliability, and safety of the device laparoscopically with respect to adequate deployment of the patch.

During 1 year all patients with small ventral hernias were treated with this memory-containing patch and were inspected by laparoscopy. Just prior to insertion of the patch, remaining adhesions on top of the peritoneum were analyzed, as was the interference of the umbilical ligament. The final position of the patch was monitored, identifying the cupping phenomenon, exposure of the polypropylene to the viscera, and the amount of tension on the straps. All patients were followed for 2 years and postoperative complications and recurrence rate were monitored.

Twenty-eight patients were operated on for repair of a small ventral hernia with laparoscopic control. Adhesions, not digitally palpable, that interfered with adequate patch deployment were observed in more than 80% of the cases. After a median follow-up of 25 months a 14.8% recurrence rate was observed.

The patch, consisting of both polypropylene and ePTFE, leads to unacceptable morbidity and a high rate of recurrences. By laparoscopic evaluation, these recurrences are probably based on a combination of material characteristics and unavoidable technical errors.
Anzeige 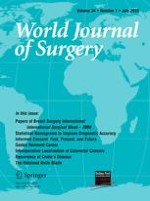 Erratum to: Causes and Treatment of Recurrent Hyperparathyroidism After Subtotal Parathyroidectomy in the Presence of Multiple Endocrine Neoplasia 1