Despite inguinal hernia repair being one of the most common elective operations performed in general surgical practice, there are many controversies including indications for repair and selection of the surgical technique. In recent years, laparoscopic repair has gained wider acceptance because it is associated with fewer postoperative complications and less chronic pain when compared with conventional approaches with similar recurrence rate. However, patients with lower abdominal surgery are contraindicated for laparoscopic approach. There are few studies that evaluated whether patients who have been subjected to radical prostatectomy might be subjected to laparoscopic hernia repair with the same benefits as those without previous radical prostatectomy.

Between March 2010 and March 2013, 20 consecutive patients, who had been subjected to prior radical prostatectomy, underwent laparoscopic transabdominal inguinal repair and were followed prospectively. Surgical procedure was performed using a standard technique.

Mean operative time was 67.5 min. There was only one (5 %) intraoperative minor complication, an injury to the inferior epigastric vessels, which was managed by clipping of the vessels. There were no major postoperative complications. After 24 h and on the seventh postoperative day, 85 and 90 % of patients had no pain or only complained of discomfort, respectively. Nine patients (45 %) did not need any analgesics postoperatively. The mean time to return to leisure activities and to work was 3.1 and 5.6 days, respectively. There was no conversion to open surgery. All patients were discharged within 24 h. After a mean follow-up of 14 months, none of the patients presented recurrence.

TAPP after prostatectomy is safe and effective. It seems that patients undergoing laparoscopic repair after radical prostatic resection have the same benefits as those without prostatectomy. 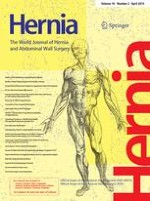 Assessment of 126,913 inguinal hernia repairs in the Emilia-Romagna region of Italy: analysis of 10 years