For comparison of laparoscopic IPOM versus sublay technique for elective incisional hernia repair, the number of cases included in randomized controlled trials and meta-analyses is limited. Therefore, an urgent need for more comparative data persists.

In total, 9907 patients with an elective incisional hernia repair and 1-year follow-up were selected from the Herniamed Hernia Registry between September 1, 2009 and June 1, 2016. Using propensity score matching, 3965 (96.5%) matched pairs from 4110 laparoscopic IPOM and 5797 sublay operations were formed for comparison of the techniques.

The Herniamed quality assurance study is a multicenter, internet-based hernia registry [24‐27] with voluntary participating institutions which incorporates prospective data of patients who have undergone routine hernia surgery. These data are obtained from 618 voluntarily participating hospitals and surgeons engaged in private practice (Herniamed Study Group) mainly in Germany, Austria, and Switzerland (status: July 3rd, 2017). In Germany, surgeons in private practice are not employed by a hospital [27]. Rather, they operate on patients in outpatient/ambulatory surgical centers or hospitals for a fee [27]. All patients gave informed consent agreeing to participate. As part of the informed consent declaration, information provided to patients regarding participation in the Herniamed Registry included the request that the hospital or medical practice providing treatment would like to be informed about any problem occurring after the operation and that patients have the opportunity to attend clinical examination [27]. All postoperative complications occurring up to 30 days after surgery are recorded [27]. Postoperative pain at 1 week or 1 month and quality of life are not collected in the registry. At 1-year follow-up, postoperative complications are once again reviewed when the general practitioner and patient are asked to report any recurrences, pain at rest, pain on exertion, and chronic pain requiring treatment [27]. If recurrence or chronic pain is reported by the patient or the general practitioner the patient can be requested to present themselves for clinical or radiological examination [27]. A recent publication has provided impressive evidence of the role of patient-reported outcomes for both recurrence and chronic pain following incisional hernia repair [28].
Anzeige
In the current analysis, prospective data of patients who underwent primary elective incisional hernia repair with the laparoscopic IPOM or open sublay approach were evaluated to compare both techniques with respect to perioperative and 1-year follow-up outcomes.
The main inclusion criteria were minimum age of 16 years, primary elective incisional hernia repair using the laparoscopic IPOM or open sublay technique, no use of a Physiomesh [26], and availability of data at 1-year follow-up (Fig. 1). 9907 of 15,489 patients fulfilled these inclusion criteria (Fig. 1).
×
Physiomesh was excluded from this analysis, because Ethicon initiated a voluntary market withdrawal of Physiomesh in response to reports from the Danish Hernia Data Base and the Herniamed Hernia Registry about significantly higher recurrence rates in laparoscopic IPOM compared with other meshes [26].
For uniformity of the analyzed patient population, recurrent incisional hernias were also excluded.
In total, 9907 patients were selected between September 1, 2009 and June 1, 2016. Of these patients, 5797 had undergone open sublay and 4110 laparoscopic IPOM operations (Fig. 2).
×
Pairwise PS matching analysis was performed for these 9907 patients to obtain homogeneous comparison groups. For the purpose of the current analysis, the mutually independent matching groups laparoscopic IPOM versus open sublay (n = 3965; 96.5%) were thus formed (Fig. 2).
Anzeige
All statistical analyses were performed using the Software SAS 9.4 (SAS Institute Inc., Cary, NC) and intentionally calculated to a full significance level of 5%, that is, they were not corrected with respect to multiple tests, and each p ≤ 0.05 represents a significant result. Sole exception is the post hoc analysis of single items of intraoperative and postoperative complications. Here, a Bonferroni adjustment with factor 8 and 6, respectively, is performed.
Perioperative and 1-year follow-up outcomes (intra- and postoperative complications, complication-related reoperations, pain at rest and on exertion, pain requiring treatment, and recurrences at 1-year follow-up) were compared for laparoscopic IPOM versus open sublay using, first of all, PS matching. Matched samples were then analyzed via McNemar’s test. The obtained results are presented as the non-diagonal elements of the 2 × 2 frequency table, the corresponding p values and the odds ratio (OR) estimates with 95% confidence interval for matched samples.
Propensity score matching was performed using greedy algorithm and a caliper of 0.5 standard deviations. The variables used for matching were as follows: age (years), sex (male/female), body mass index (BMI) (kg/m2), American Society of Anesthesiologist (ASA) score (I–IV), preoperative pain (yes/no/unknown), defect size [European Hernia Society (EHS)] classification [29] [W1 = width < 4 cm, W2 = width ≥ 4–10 cm, W3 = width > 10 cm], defect localization (EHS classification medial, lateral, combined [29]), and presence of at least one risk factor (diabetes, chronic obstructive pulmonary disease, smoking, immunosuppression, aortic aneurysm, coagulopathy, corticosteroid therapy, antiplatelet, or anticoagulation therapy). The balance of the matched sample was assessed using standardized differences (also given for the pre-matched sample), which should not exceed 10% (< 0.1) after creating matched pairs.
For pairwise comparison of matching parameters between operation methods (in order to present the differences between the original pre-matched samples), X2 test and t tests (Satterthwaite) were performed for categorical and continuous variables, respectively.
Anzeige

When comparing laparoscopic IPOM and open sublay approaches in the repair of incisional hernias, the current PS matching analysis of prospective data obtained from the Herniamed Hernia Registry identified no difference in the proportion of patients experiencing chronic pain or recurrence after 1-year follow-up. However, to its disadvantage, the laparoscopic IPOM technique was found to be associated with significantly increased rates of intraoperative complications, particularly bleeding, bowel, and other organ injuries. In discrepancy to the literature, this registry study does not demonstrate a higher rate of bowel, but of total organ injuries in the laparoscopic IPOM group. On the other hand, patients operated on with the open sublay approach experienced significantly higher rates of surgical postoperative complications, predominantly surgical site infection, seroma, and bleeding combined with higher rates of complication-related reoperations. Furthermore, rates of general postoperative complications were also observed to be increased with the open sublay technique. Additionally, the hospital stay is significantly longer for the open sublay technique.
Therefore, in the context of a relatively large population of patients found in everyday clinical routine, the current analysis confirms the findings of the meta-analyses mentioned previously [13‐16]. Beyond that, this study establishes a direct comparison between the best open technique, the sublay operation [2], and the laparoscopic IPOM. Furthermore, this analysis again clearly demonstrates that intraoperative complications, namely, bleeding, bowel, and other organ injuries are the Achilles Heel of the minimally invasive approach. Consequently, the expertise of the surgeon and rigorous adherence to guidelines are of paramount importance in the prevention of intraoperative complications [17‐21].
The major disadvantage of the open sublay technique is the highly significantly increased rate of surgical site infection, seroma, and bleeding, which is closely associated with the requirement to reoperate.
In accordance with these findings, the laparoscopic IPOM technique should be favored over the open sublay approach in the repair of incisional hernias, given that surgical expertise is evident.
However, the international guidelines state that the recurrence rate after laparoscopic IPOM repair increases when the defect size exceeds 10 cm. Thus it is outlined that laparoscopic IPOM is no longer indicated under those circumstances [17‐21]. As of yet, the roles of additional defect suturing and proper mesh overlap in those cases cannot be assessed due to the insufficient quality of existing studies [30, 31] as well as the scarcity of long-term data [17‐21]. Our subgroup analysis of 339 matched pairs of laparoscopic IPOM and sublay technique with defect sizes ≥ 10 cm demonstrates no significant difference in the recurrence rate with 5.6% versus 4.7% (p = 0.736), but the relatively low number of cases and the short follow-up of only 1 year needs to be considered.
Incorrect or missing data limit a registry [27]. In the Herniamed Hernia Registry, all participating surgeons or responsible chairmen of surgical departments sign a contract for data correctness and completeness. Missing data are indicated by the registry software. Postoperative outcomes are once again reviewed at 1-year follow-up. As part of the certification process of hernia centers, data entry can be controlled by experts. The best safeguard is to match the data against another registry, administrative data, and/or the literature [32]. Voluntary participation in the registry is another limitation of this study due to the possibility of no inclusion of cases with complication.
A further limitation represents the use of different meshes, different mesh fixation, and different techniques.
The findings presented here are mainly in concordance with the existing meta-analyses [13‐16] and the statements and recommendations of the international Guidelines [17‐21]. Also 5-year follow-up data of the Danish Hernia Database showed no disadvantages in terms of recurrence rate and mesh-related complications for laparoscopic IPOM compared to open incisional hernia repair [33]. Another study reported an incidence of intestinal obstruction secondary to adhesions in 11.5% [34]. The cost of surgery is higher for laparoscopic procedure, but a shorter hospital stay may make laparoscopic surgery more cost effective [18]. More data on the outcome of incisional hernia repair in laparoscopic IPOM technique with defect size W3 ≥ 10 cm according to the EHS classification are urgently needed.
Innovations like the mini-or less-open sublay (MILOS) and EMILOS techniques seem to improve the outcome of the sublay procedure leading to advantages in comparison to laparoscopic IPOM [35, 36].
In summary, the PS matching analysis of data from the Herniamed Hernia Registry presented here for comparison of laparoscopic IPOM vs open sublay in incisional hernia repair demonstrates clear advantages for the minimally invasive technique regarding postoperative surgical and general complications as well as complication-related reoperations, but disadvantages concerning intraoperative complications, mainly bleeding, bowel, and other organ injuries. No significant difference can be found in recurrence and pain rates after 1-year follow-up. The findings of this registry analysis confirm the validity of the literature data and the statements and recommendations of the international guidelines. Laparoscopic IPOM needs to be more evaluated in incisional hernia repair with defects ≥ 10 cm.

Simon T, Adolf D, Köckerling D, Mayer F, Reinpold W, Weyhe D, and Bittner R have no conflicts of interest or financial ties to disclose.
Open AccessThis article is distributed under the terms of the Creative Commons Attribution 4.0 International License (http://​creativecommons.​org/​licenses/​by/​4.​0/​), which permits unrestricted use, distribution, and reproduction in any medium, provided you give appropriate credit to the original author(s) and the source, provide a link to the Creative Commons license, and indicate if changes were made. 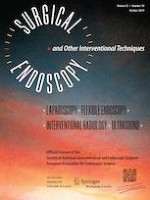