The online version of this article (https://​doi.​org/​10.​1007/​s00192-019-03889-x) contains supplementary material. This video is also available to watch on http://​link.​springer.​com/​. Please search for this article by the article title or DOI number, and on the article page click on ‘Supplementary Material’.

Imaging showed a tumor originating from the dorsal and cranial part of the urethra and developing in the vesicouterine space and vesicovaginal septum, dislocating the bladder ventrally and the uterus cranial-dorsally.

Tranvaginal biopsy showed a benign leiomyoma. A laparoscopic approach with development of the vesicouterine space permitted a safe partial morcellation of the myoma. After the bladder and vaginal wall had been completely freed, further caudal dissection was conducted with isolation of the distal cranio-dorsal portion of the urethra. The dissection plane with the vaginal wall was developed up to the caudal margin of the urethral myoma almost corresponding to the vulvar plane, and total excision of the lesion was performed.

Laparoscopic management of urethral leiomyomas that develop into the vesicouterine space and vesicovaginal septum is feasible and safe also for very large lesions. 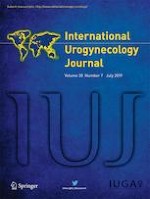 Effects of wearing supportive underwear versus pelvic floor muscle training or no treatment in women with symptoms of stress urinary incontinence: an assessor-blinded randomized control trial

What happens to urinary incontinence after pelvic organ prolapse surgery?

Commentary on: Effects of mesh-related complications in vaginal surgery on quality of life