Given the difficulty level of minimally invasive pancreatoduodenectomy (MIPD), limited data exist for a comparison to open pancreatoduodenectomies. As the technique becomes more diffuse, issues regarding the adequacy of oncologic margins and lymph node retrieval need to be addressed.

Twenty-seven articles describing outcomes after MIPD were found, and a total of 285 cases were described. Main malignancy treated was pancreatic adenocarcinoma, accounting for 32% of all cases. Eighty-seven percent were performed totally laparoscopically, and 13% were performed with a hand-assisted approach to facilitate the reconstruction step of the procedure. The rate of conversion to an open procedure was 9%. Estimated blood loss had a weighted average (WA) of 189 mL. Average length of stay had a WA of 12 days, and average follow-up had a WA of 14 months. The overall complication rate was 48%, and the overall mortality rate was 2%. Average lymph nodes retrieved ranged from 7 to 36 nodes, with a WA of 15 nodes, and positive margins of resection were reported to be positive in 0.4% of patients with malignant disease.

This review found similar outcomes with respect to perioperative morbidity and mortality rates compared to open pancreatoduodenectomies. The oncologic goals of pancreatic resection may be able to be achieved by MIPD, but longer follow-up and larger series are still needed. 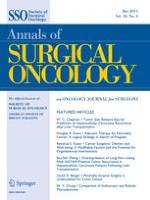 Dynamic Tension Between Success in a Surgical Career and Personal Wellness: How Can We Succeed in a Stressful Environment and a “Culture of Bravado”?

Regional Control and Morbidity After Superficial Groin Dissection in Melanoma