Reestablishing continuity after a Hartmann’s procedure is considered a major surgical procedure with high morbidity/mortality. The aim of this study was to assess the short-/long-term outcome of laparoscopic restoration of bowel continuity after HP. A prospectively collected database of colorectal laparoscopic procedures (>800) performed between June 2005 and June 2013 was used to identify 20 consecutive patients who had undergone laparoscopic reversal of Hartmann’s procedure (LHR). Median age was 65.4. Ten patients (50 %) had undergone surgery for perforated diverticulitis, 3 (15 %) for cancer, and 7 (35 %) for other reasons (volvulus, posttraumatic perforation, and sigmoid perforation from foreign body). Previous HP had been performed laparoscopically in only 3 patients. Median operative time was 162.5 min. All the procedures were completed laparoscopically. Intraoperative complication rate was nil. Post-operative mortality and morbidity were respectively 0 and 10 % (1 pneumonia, 1 bowel obstruction from post-anastomotic stenosis which required resection and redo of the anastomosis). Median time to first flatus was 3 days, to normal diet 5 days. Median hospital stay was 9 days without readmissions. We followed up the patients for a median of 44 months: when asked, all 20 (100 %) said they would undergo the operation (LHR) again; 3 (15 %) had been re-operated of laparoscopic mesh repair for incisional hernia. When performed by experienced surgeons, LHR is a feasible, safe, reproducible operation, which allows early return of bowel function, early discharge and fast return to work for the patient. It has a low morbidity rate. 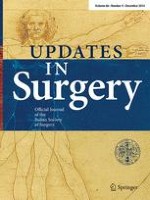 A multicenter survey on distal pancreatectomy in Italy: results of minimally invasive technique and variability of perioperative pathways

Cholecystectomy in octogenarians: be careful