This study was designed to describe and analyze the outcomes after laparoscopic reversal to normal anatomy (NA) with or without concomitant “sleeve gastrectomy” (SG), after Roux-en-Y gastric bypass (RYGB). Reversal has been proposed as corrective strategy after RYGB.

We propose a retrospective analysis of a prospectively kept database.

From January 2005 to October 2012, 20 female patients underwent laparoscopic reversal after RYGB for one or more of the following conditions: hypoglycaemic syndrome (nine patients), weight regain (six patients), severe dumping (six patients), and cachexia (two patients). Preoperative BMI was 28.0 (19.2–40.3) kg/m². Reversal was performed to NA in ten patients and included a SG procedure in another ten. Postoperative complications included one bleeding and three leaks (15 %; all in SG patients). Mean hospital stay was 7 days. Mortality was 0. With a mean follow-up of 11.5 months, all but one patient recovered from their initial condition. However, three developed severe gastroesophageal reflux disease (GERD) symptoms and three had chronic diarrhoea.

Outcomes of laparoscopic reversal of RYGB are good, but complications may occur when SG is added. The surgical alterations caused by the reversal may explain the GERD or diarrhoea experienced by some patients. 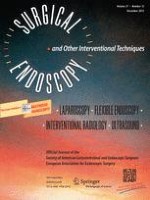 A call to arms: obese men with more severe comorbid disease and underutilization of bariatric operations

Learning lessons for the future: assessments of demand and benefit are required in addition to training in single incision laparoscopic surgery