Laparoscopic Roux-en-Y gastric bypass (LRYGB) is considered the gold standard for the treatment of morbid obesity but is technically challenging and results in significant perioperative complications. While laparoscopic mini-gastric bypass (LMGB) has been reported to be a simple and effective treatment for morbid obesity, controversy exists. Long-term follow-up data from a large number of patients comparing LMGB to LRYGB are lacking.

Between October 2001 and September 2010, 1,657 patients who received gastric bypass surgery (1,163 for LMGB and 494 for LRYGB) for their morbid obesity were recruited from our comprehensive obesity surgery center. Patients who received revision surgeries were excluded. Minimum follow-up was 1 year (mean 5.6 years, from 1 to 10 years). The operative time, estimated blood loss, length of hospital stay, and operative complications were assessed. Late complication, changes in body weight loss, BMI, quality of life, and comorbidities were determined at follow-up. Changes in quality of life were assessed using the Gastrointestinal Quality of Life Index.

There was no difference in preoperative clinical parameters between the two groups. Surgical time was significantly longer for LRYGB (159.2 vs. 115.3 min for LMGB, p < 0.001). The major complication rate was borderline higher for LRYGB (3.2 vs. 1.8 %, p = 0.07). At 5 years after surgery, the mean BMI was lower in LMGB than LRYGB (27.7 vs. 29.2, p < 0.05) and LMGB also had a higher excess weight loss than LRYGB (72.9 vs. 60.1 %, p < 0.05). Postoperative gastrointestinal quality of life increased significantly after operation in both groups without any significant difference at 5 years. Obesity-related clinical parameters improved in both groups without significant difference, but LMGB had a lower hemoglobin level than LRYGB. Late revision rate was similar between LRYGB and LMGB (3.6 vs. 2.8 %, p = 0.385).

This study demonstrates that LMGBP can be regarded as a simpler and safer alternative to LRYGB with similar efficacy at a 10-year experience. 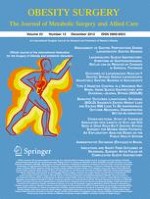 Laparoscopic Sleeve Gastrectomy: Symptoms of Gastroesophageal Reflux can be Reduced by Changes in Surgical Technique

Principles of Meta-analysis Should be Well Understood

Effectiveness of the Transoral Endoscopic Vertical Gastroplasty (TOGa®): a Good Balance Between Weight Loss and Complications, if Compared with Gastric Bypass and Biliopancreatic Diversion