A 64-year-old man was admitted to our hospital with hematemesis. Emergency upper gastrointestinal endoscopy revealed bleeding from a submucosal tumor (SMT) in the antrum of the stomach, with two other SMTs at different sites. Based on his family history, we diagnosed familial multiple gastric gastrointestinal stromal tumors (GISTs) and performed laparoscopic total gastrectomy. Three distinct tumors were found: one in the fornix, one in the lesser curvature of the angle, and one in the antrum of the stomach. Microscopic examination of the resected specimens revealed different cytomorphologies, of the spindle and epithelioid type, as well as immunophenotypes in the tumors. Mutation analysis revealed different sites of mutation in c-kit and PDGFRA. No mutation was detected in the normal tissue of the stomach. These findings confirmed a diagnosis of multiple sporadic gastric GISTs. Thus, investigating germline mutation might assist in the preoperative diagnosis of multiple gastric GISTs. 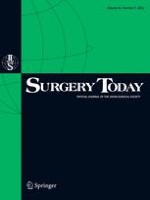 The central vein access port and catheter in outpatient chemotherapy for colorectal cancer: a retrospective study of 101 patients

Role of tumor-associated macrophages in the progression of hepatocellular carcinoma