Feasibility of laparoscopic transperitoneal inguinal hernia repair (TAPP) in primary hernias has been well established, but can the TAPP also be recommended after radical prostatectomy?

Our prospectively collected patient database was reviewed from March 1996 until December 2006 in order to compare operative data and postoperative outcomes in 264 TAPPs after prostatectomy with 10,962 TAPPs because of primary hernias. Patients operated after prostatectomy were divided into two subgroups (year of surgery March 1996–July 2002 and August 2002–December 2006, with 132 TAPPs per group) to check for a possible learning curve.

Even if TAPP after radical prostatectomy is a difficult operation it can be performed efficiently and safely. However, for a definite decision regarding recurrence rate long-term results have to be waited for. 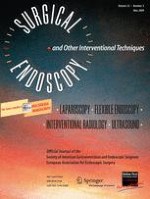