This prospective cohort study with a control group involved 93 patients. Between 2008 and 2010, 43 patients underwent the laparoscopic transperitoneal sublay mesh repair. During the same period of time, a control group of 50 patients underwent an open sublay repair after Rives and Stoppa. In 2011, all patients were invited for follow-up. This included pain assessments and physical examinations with use of ultrasound.

Our initial results indicate that the new laparoscopic transperitoneal sublay mesh repair is a safe and effective method for the treatment of small- and medium-size ventral and incisional hernias.
Anzeige 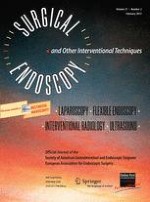