Large genomic rearrangements of the BRCA1 and BRCA2 genes: review of the literature and report of a novel BRCA1 mutation | springermedizin.de Skip to main content
TOOLBAR 1 2 3 4
SUCHE MENÜ 1 2 3 4

Germline mutations in BRCA1 and BRCA2 increase the risk for developing breast and ovarian cancer. Previously, the techniques available allowed only for the identification of small genomic alterations, but the dawn of new technology now allows for the rapid detection of large genomic rearrangements (LGRs). LGRs in BRCA1 are responsible for between 0 and 27% of all BRCA1 disease-causing mutations identified in numerous populations. Such alterations are far less common in the BRCA2 gene. To determine the impact of BRCA1 and BRCA2 LGRs in South Africa, 52 hereditary breast and/or ovarian South African families (36 were Afrikaners) were screened for BRCA1 and BRCA2 LGRs using multiplex ligation-dependent probe amplification. These patients were previously shown to be BRCA1 and BRCA2 small mutation negative. One LGR was detected in BRCA1 in a South African family with Greek ancestry. This is a novel deletion of both exons 23 and 24 (NG_005905.2:g.169527_180579del). This first study of BRCA rearrangements in South Africa reveals that LGRs comprise ~3% of identified BRCA1 mutations, a low rate in comparison to other populations. In addition, we have reviewed all 98 previously characterized BRCA1/2 LGRs and re-named them according to the recommended HGVS nomenclature, using the recently released RefSeqGene records, NG_005905.2 and NG_012772.1 for BRCA1 and BRCA2. A standardized resource is now provided which will assist researchers in determining whether their LGRs are novel. Furthermore, we have clarified some of the previously misunderstood rules of nomenclature, which will make uniform reporting of BRCA1/2 easier in the future. 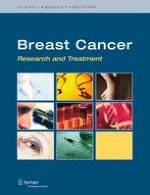 Polymorphisms of the nuclear receptor pregnane X receptor and organic anion transporter polypeptides 1A2, 1B1, 1B3, and 2B1 are not associated with breast cancer risk

Soy isoflavones consumption and risk of breast cancer incidence or recurrence: a meta-analysis of prospective studies

Vegetable intake is associated with reduced breast cancer recurrence in tamoxifen users: a secondary analysis from the Women’s Healthy Eating and Living Study