Esophageal squamous cell carcinoma (ESCC) is a heterogeneous disease in the sense that the biological behavior is regulated by the activation of various signaling pathways. The aim of this study was to investigate the relationships between the expressions of various targetable proteins and the clinicopathological characteristics of ESCC patients.

A total of 286 patients with ESCC who had undergone curative surgical resection without neoadjuvant therapy were enrolled in this study. The protein expressions of EGFR, HER2, MET, IGF1R, FGFR2, p53, and PD-L1 were immunohistochemically evaluated in a tissue microarray analysis. The relationships between the expression statuses of each of the above molecules, and the PD-L1 expression status as well as the clinicopathological characteristics, including the survival outcome were assessed.

This large cohort study demonstrated that multiple molecules were co-expressed in most of the ESCC cases, suggesting that combining molecular targeted agents for these co-expressed molecules should be considered. 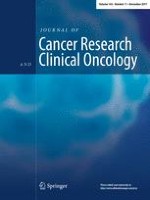 Can germ cell neoplasia in situ be diagnosed by measuring serum levels of microRNA371a-3p?