Laser-assisted drug delivery has generated intense interest. The objectives of this study are to evaluate the clinical benefit of laser-assisted corticosteroid delivery and to compare this technique to corticosteroid intralesional injection, a standard treatment for keloids. Patients with keloids on the left shoulder after BCG vaccination were enrolled in this study. The entire lesion was first treated with an ablative fractional erbium-YAG laser. After this treatment, the lesion was divided into two halves. The first half received an intralesional injection of corticosteroid, whereas the second half received topical application of corticosteroids that were occluded for 3 hours. Four treatment sessions were conducted, with treatments occurring once every 6 weeks. Treatment outcomes were evaluated using the Vancouver Scar Scale (VSS). Pain was self-assessed by the patient during the procedure. The mean keloid VSS score before treatment was 8.59 ± 1.23 for the corticosteroid injection site and 8.31 ± 2.09 for the topical site. After treatment, the mean keloid VSS score was decreased on both sides (4.56 ± 1.09 vs 5.02 ± 0.87, respectively, P > 0.05). Patients rated their satisfaction level as “moderate” on both sides. However, the mean pain score was 1.1 out of 10 on the topical side versus 6.1 on the corticosteroid injection site. The combination of ablative fractional laser treatment and topical corticosteroid application is a promising modality for the treatment of keloids. Moreover, this procedure was not associated with any serious adverse reactions or unbearable pain. 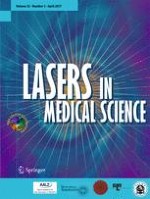 Diagnostic validity of ICDAS and DIAGNOdent combined: an in vitro study in pre-cavitated lesions

The diagnostic accuracy of a laser fluorescence device and digital radiography in detecting approximal caries lesions in posterior permanent teeth: an in vivo study