The implantation of autologous cartilage as the gold standard operative procedure for the reconstruction of cartilage defects in the head and neck region unfortunately implicates a variety of negative effects at the donor site. Tissue-engineered cartilage appears to be a promising alternative. However, due to the complex requirements, the optimal material is yet to be determined. As demonstrated previously, decellularized porcine cartilage (DECM) might be a good option to engineer vital cartilage. As the dense structure of DECM limits cellular infiltration, we investigated surface modifications of the scaffolds by carbon dioxide (CO2) and Er:YAG laser application to facilitate the migration of chondrocytes inside the scaffold. After laser treatment, the scaffolds were seeded with human nasal septal chondrocytes and analyzed with respect to cell migration and formation of new extracellular matrix proteins. Histology, immunohistochemistry, SEM, and TEM examination revealed an increase of the scaffolds’ surface area with proliferation of cell numbers on the scaffolds for both laser types. The lack of cytotoxic effects was demonstrated by standard cytotoxicity testing. However, a thermal denaturation area seemed to hinder the migration of the chondrocytes inside the scaffolds, even more so after CO2 laser treatment. Therefore, the Er:YAG laser seemed to be better suitable. Further modifications of the laser adjustments or the use of alternative laser systems might be advantageous for surface enlargement and to facilitate migration of chondrocytes into the scaffold in one step. 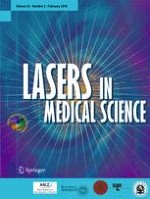 Randomized, blinded, controlled trial on effectiveness of photobiomodulation therapy and exercise training in the fibromyalgia treatment

Letter about: Treatment for residual stones using flexible ureteroscopy and holmium laser lithotripsy after the management of complex calculi with single-tract percutaneous nephrolithotomy