Laparoscopic ventral mesh rectopexy (VMR) is an effective and well-recognised treatment for symptoms of obstructive defecation in the context of rectal prolapse and recto-rectal intussusception. However, due to the technical complexity of VMR, a significant learning curve has been previously described. This paper examines the effect of proctored adoption of VMR on learning curves, operative times, and outcomes.

A retrospective database analysis of two district general hospitals was conducted, with inclusion of all cases performed by two surgeons since first adoption of the procedure in 2007–2015. Operative time, length of stay, and in-hospital complications were evaluated, with learning curves assessed using cumulative sum curves.

Three hundred and eleven patients underwent VMR during the study period and were included for analysis. Patients were near-equally distributed between surgeons (surgeon A: n = 151, surgeon B, n = 160) with no significant differences between gender, age, or ASA grade. In-hospital morbidity was 3.2 %, with 0 % mortality. Cumulative sum curve analysis suggested a change point of between 25 and 30 cases based on operative times and length of stay and was similar between both surgeons. No significant change point was seen for morbidity or mortality.

VMR is an effective and safe treatment for rectal prolapse. Surgeons in this study were proctored during the adoption process by another surgeon experienced in VMR; this may contribute to increased safety and abbreviated learning curve. In the context of proctored adoption, this study estimates a learning curve of 25–30 cases, without detrimental impact on patient outcomes. 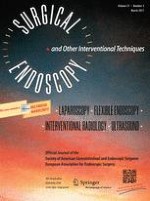 What is the BMI threshold for open ventral hernia repair?