Cardiac “side population” (SP) cells have previously been found to differentiate into both endothelial cells and cardiomyocytes in mice and rats, but there are no data on SP cells in the human adult heart. Therefore, human cardiac atrial biopsies were dissociated, stained for SP cells and analyzed with FACS. Identified cell populations were analyzed for gene expression by quantitative real-time PCR and subjected to in vitro differentiation. Only biopsies from the left atrium contained a clearly distinguishable population of SP cells (0.22 ± 0.08%). The SP population was reduced by co-incubation with MDR1 inhibitor Verapamil, while the ABCG2 inhibitor FTC failed to decrease the number of SP cells. When the gene expression was analyzed, SP cells were found to express significantly more MDR1 than non-SP cells. For ABCG2, there was no detectable difference. SP cells also expressed more of the stem cell-associated markers C-KIT and OCT-4 than non-SP cells. On the other hand, no significant difference in the expression of endothelial and cardiac genes could be detected. SP cells were further subdivided based on CD45 expression. The CD45−SP population showed evidence of endothelial commitment at gene expression level. In conclusion, the results show that a SP population of cells is present also in the human adult heart. 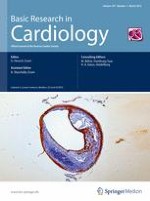