Purpose: There exists no consensus on the site of E/e′ measurement. This study aimed to evaluate the predictive value of septal and lateral E/e′ along with the importance of their intra-individual difference. Methods: In 1775 persons from the general population, peak early diastolic velocity (e′) was obtained by color tissue Doppler at the septal and lateral mitral annular sites. The endpoint was combined of cardiovascular death or admission due to heart failure or acute myocardial infarction. Results: During a median follow-up of 10.9 years, the endpoint occurred in 227 participants. E/e′septal and E/e′lateral were equally strong predictors of cardiac events; in age- and sex-adjusted models they did not differ in AUC (septal: 0.8385, lateral: 0.8389; p = 0.94) or in continuous NRI (p = 0.84). Models using E/e′average did not improve AUC or NRI, and the intra-individual difference between sites had no predictive value (p = 0.79). E/e′septal was generally higher than E/e′lateral, thus age- and sex-specific normal values were reported for both sites for a population free of cardiac events during 10 years of follow-up. Conclusions: Septal and lateral E/e′ are equally useful in predicting cardiac events in the general population. Measuring both sites provides no further predictive value than measuring a single site. 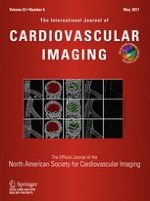