Leishmania (Viannia) shawi was characterized only recently, and few studies concerning the immunogenic and protective properties of its antigens have been performed. The present study aimed to evaluate the protective potential of the five antigenic fractions isolated from L. (V.) shawi promastigotes in experimental cutaneous leishmaniasis.

Soluble antigen from L. (V.) shawi promastigotes was submitted to reverse phase HPLC to purify F1, F2, F3, F4 and F5 antigens. BALB/c mice were immunized once a week for two consecutive weeks by subcutaneous routes in the rump, using 25 μg protein. After 1 week, groups were challenged in the footpad with L. (V.) shawi promastigotes. After 8 weeks, those same mice were sacrificed and parasite burden as well as the cellular and humoral immune responses were evaluated.

F1 and F5-immunized mice restrained lesion progression and parasite load in the skin. However, only the F1 group was able to control the parasitism in lymph nodes, which was associated with low IL-4 and high IFN-γ production; IgG2a isotype was increased in this group. Immunizations with F2, F3 and F4 antigens did not protect mice.

The capability of antigens to restrain IL-4 levels and increase IFN-γ was associated with protection, such as in immunization using F1 antigen. 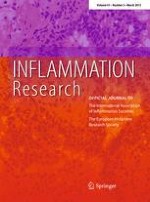 Study of dexamethasone, baicalin and octreotide on brain injury of rats with severe acute pancreatitis