Lenalidomide: in vitro evaluation of the metabolism and assessment of cytochrome P450 inhibition and induction | springermedizin.de Skip to main content
TOOLBAR 1 2 3 4
SUCHE MENÜ 1 2 3 4

To assess the potential for drug–drug interactions between lenalidomide and substrates and inhibitors of cytochrome P450 (CYP) isozymes.

Lenalidomide is not a substrate, inhibitor, or inducer of CYP group of enzymes; clinically relevant pharmacokinetic drug–drug interactions are unlikely to occur between lenalidomide and co-administered CYP substrates or inhibitors. 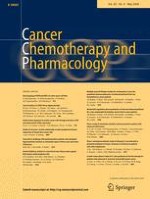 Successful re-challenge with panitumumab in patients who developed hypersensitivity reactions to cetuximab: report of three cases and review of literature