The seminal SWOG trial S8736 trial established the success of a short course of chemotherapy followed by involved field radiation in treating limited stage aggressive NHL lymphoma. Addition of rituximab offered a surprisingly modest improvement in this disease subset. Radioimmunotherapy could hold a slight advantage over rituximab, but that should be investigated in a randomized trial setting. The role of radiation therapy continues to be widely debated, with interpretation complicated by different trial populations, methods of assessing risk, as well as by differences in timing and dose of radiation. Prolonged course of chemotherapy followed by radiation is certainly not justified in all patients with limited stage disease. Three to four cycles of R-CHOP followed closely by IFRT/ISRT, or six cycles of R-CHOP chemoimmunotherapy (based on the MInT trial) are acceptable options. PET/CT scans may further limit radiation to minority of patients who have residual PET-positive masses. PET/CT-directed treatment strategy is being tested in a US intergroup trial. There is evidence that localized DLBCL has a different biology as compared to advanced stage disease. This relates to propensity of limited stage disease to be proportionately more germinal center B-cell like (GCB) and to have late relapses beyond 5 years. Both biology and imaging need to be integrated in the study of limited stage disease without presumption that it should be approached the same as advanced stage disease. 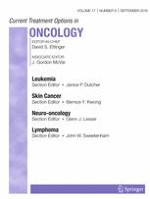 Controversies in the Therapy of Brain Metastases: Shifting Paradigms in an Era of Effective Systemic Therapy and Longer-Term Survivorship

The Promise of Molecularly Targeted and Immunotherapy for Advanced Melanoma