CNS embryonal tumors comprise a group of highly malignant neoplasms with a wide spectrum of histomorphological entities that includes Medulloblastoma (MB), Atypical Teratoid/Rhabdoid Tumor (AT/RT), Neuroblastoma (NB), Ganglioneuroblastoma (GNB), Embryonal Tumor with Multilayered Rosettes (ETMR), and the embryonal tumor—Not Otherwise Specified (NOS). The entity ETMR includes previously described histopathologic patterns—Embryonal Tumor with Abundant Neuropil and True Rosettes (ETANTR), Ependymoblastoma (EBL), and Medulloepithelioma (MEPL). Based on the histopathological similarities (multilayered rosettes) among ETANTR, EBL, and MEPL, as well as uniform clinical behavior and common molecular genetic characteristics, the WHO revision has created a new entity, “ETMR.” Immunoreactivity of LIN28A has been identified as a sensitive tool for the diagnosis of this entity. Since there is a paucity of literature regarding immunoreactivity of LIN28A across all embryonal CNS tumors, the present study was undertaken.

During the 5-year study period (2012 to 2016), all the embryonal tumors (MB, AT/RT, other embryonal tumors—ETANTR, MEPL, PNET) that had been earlier diagnosed in the department of neuropathology (cases operated in our institute as well as received as referral) were reviewed. The archived Hematoxylin and Eosin (H&E) and the available immunohistochemistry (IHC) sections were studied. Further, for the other embryonal tumors where the paraffin blocks were available, an extended panel of IHC was performed for confirming the diagnosis of embryonal tumor and only confirmed cases were included in the study. The demographic details of the study cohort were noted. IHC for LIN28A was performed on conventional sections.

Our study reiterates that LIN28A is a sensitive IHC marker for the diagnosis of ETMR. We also show that among CNS embryonal tumors, LIN28A is not specific to ETMRs and such immunoreactivity can also be seen in a proportion of AT/RTs. 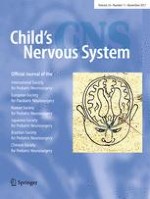 X-ray vs. CT in identifying significant C-spine injuries in the pediatric population

A retrospective review of 34 cases of pediatric pituitary adenoma

The history of optic chiasm from antiquity to the twentieth century