Repeated resection is known to prolong survival, with an acceptable morbidity rate, in patients with hepatocellular carcinoma. However, little is known about the effect of repeated liver resection on postoperative liver regeneration and liver function. The aim of this study is to determine the impact of repeated liver resections on the postoperative liver regeneration rate and liver function.

A total of 71 patients, who had undergone more than three liver resections for hepatocellular carcinoma between May 2001 and December 2013 at a tertiary care hospital in Japan, were included in the analysis. Among them, CT-volumetric data for the first, second, third, and fourth or more resections were available for 36, 49, 53, and 24 patients. We analyzed the regeneration index (RI) defined as the postoperative TLV/preoperative TLV × 100 was calculated after each operation to measure the degree of regeneration. Liver function was evaluated using the indocyanine green retention rate at 15 min (ICG-R15).

The regeneration process is maintained after as many as four repeated resections. Patients with sustained liver function can safely undergo repeated liver resections for recurrences of HCC. 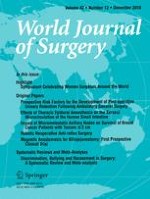 Invited Commentary to Static Prognostic Factors and Appropriate Surgical Designs of Patients with MTC: The 2nd Report of a Single-Institution Study in Japan

Antibiotic Prophylaxis for Pyloromyotomy in Children: An Opportunity for Better Stewardship

Letter to the Editor: Management of Enterocutaneous Fistula: Outcomes in 276 Patients

Noise in the Operating Room Distracts Members of the Surgical Team. An Observational Study