The aberrant expression of long noncoding RNAs (lncRNAs) is found in various types of cancers and also showed its association with the occurrence and development of gastric cancer (GC). We found lncRNA COL1A1-014 was frequently upregulated in GC.

This study investigated COL1A1-014 for its biological function at both cellular and animal levels, using MTT, flow cytometry, colony formation and transwell assays. The expression levels of COL1A1-014 and other genes were detected by RT-PCR and western blot. Luciferase reporter assay was used to detect the potential binding of miR-1273h-5p to COL1A1-014 and CXCL12.

We found that COL1A1-014 was frequently upregulated in GC tissues as well as cells. COL1A1-014 increased cell proliferation, colony forming efficiency, migration ability, invasion ability, and weight and volume of grafted tumors, while reduced cell apoptosis. Overexpression of COL1A1-014 increased the mRNA expression of chemokine (CXCmotif) ligand (CXCL12) and high levels of CXCL12 and CXCR4 proteins in GC cells. The levels of miR-1273h-5p showed an inverse correlation with COL1A1-014 and CXCL12 in GC cells transfected with miR-1273h-5p. The mRNAs of wild-type COL1A1-014 and CXCL12 showed reduction in HEK293 cells transfected with miR-1273h-5p. This suggested that COL1A1-014 functions as an efficient miR-1273h-5p sponge and as a competing endogenous RNA (ceRNA) to regulate CXCL12. The proliferative activity of COL1A1-014 on GC cells was blocked by CXCL12-CXCR4 axis inhibitor AMD-3100.

These findings demonstrated that COL1A1-014 play an important regulatory role in GC development by functioning as a ceRNA in regulating the CXCL12/CXCR4 axis via sponging miR-1273h-5p. 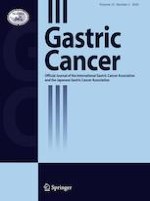 Identification of the clinically most relevant postoperative complications after gastrectomy: a population-based cohort study

Variation in receipt of therapy and survival with provider volume for medical oncology in non-curative esophago-gastric cancer: a population-based analysis