Head and neck squamous cell carcinoma (HNSCC) is the sixth most common cancer worldwide, with about 650,000 new cases and 200,000 deaths annually [ 1]. Recently, there have been substantial improvements in multimodal approaches including surgery, chemotherapy, and radiotherapy. However, the 5-year overall survival (OS) rate has not increased significantly and the mortality rate has not decreased dramatically [ 2]. Thus, it is urgently needed to search for molecular biomarkers in the diagnosis and treatment of HNSCC.
Long non-coding RNAs (lncRNAs) are transcripts of length more than 200 nucleotides without protein-coding potential, regulating gene expression at the transcriptional, posttranscriptional, and epigenetic levels [ 3]. It is promising to investigate the functions and molecular mechanisms of dysregulated lncRNAs in HNSCC tumorigenesis and progression. MIR31HG (NCBI No: NR 027054) is a recently discovered long non-coding RNA, length of 2166 bp; its transcription is regulated by methylation of the promoter region [ 4]. Reportedly, MIR31HG plays oncogenic role and its overexpression can serve as a poor prognosis marker in several cancers, including oral cancer, breast cancer, and pancreatic ductal adenocarcinoma [ 5– 7]. Accumulating study has revealed that MIR31HG can promote cancer initiation, progression, and metastasis by multiple mechanisms. MIR31HG inhibits the oncogene-induced cell senescence phenotype by regulating transcription of tumor suppressor p16 (INK4A) [ 8]. MIR31HG knockdown suppresses the capacity for proliferation, migration, and invasion of ESCC cells by targeting Furin and MMP1 [ 9]. Another study identified MIR31HG as a hypoxia-inducible lncRNA that formed a complex with HIF1A via direct binding and facilitating the recruitment of HIF1A and p300 cofactor for driving the progression of oral cancer [ 5]. However, the molecular mechanism, aggressive features, and diverse clinical prognosis of MIR31HG in HNSCC have not been fully understood. In our previous study, we screened lncRNA and mRNA expression profiles in LSCC tissues and found MIR31HG was positively correlated with HIF1A that plays an oncogenic role in LSCC [ 10]. To determine whether lncRNA MIR31HG served as a poor prognostic factor and targeted HIF1A to facilitate cell proliferation and tumorigenesis in human HNSCC, we analyzed the correlation between MIR31HG, HIF1A, and p21 expression and clinical prognosis. We conducted in vitro and vivo functional experiments and investigated the putative downstream pathway. The current results indicated that MIR31HG overexpression or co-expression of HIF1A-positive and p21-negative was correlated with the aggressive clinicopathological traits and served as a poor prognostic factor for LSCC patients. Moreover, MIR31HG facilitated cell proliferation and tumorigenesis via HIF1A and p21 by promoting the cell-cycle progression in HNSCC.
Anzeige

We performed MTT assay and constructed HNSCC tumor xenograft model to evaluate the effect of MIR31HG on cell proliferation in vitro and vivo. First, we constructed three MIR31HG knockdown (KD) shRNAs to downregulate the expression of MIR31HG in FaDu and Cal-27 cells (Additional file 1: Figure S3). The KD2 shRNA decreased MIR31HG expression by 81% in FaDu cells and 83% in Cal-27 cells, indicating the high efficiency and stability of the transfection (Fig.  2a). Subsequently, the MTT assay displayed that MIR31HG KD significantly inhibited the growth of cancer cells (Fig. 2b). Then, we constructed MIR31HG overexpression (OE) lentivirus to upregulate the expression of MIR31HG in Cal-27 cells. The MIR31HG OE lentivirus increased MIR31HG expression by 13.667 times (Fig. 2c). The MTT assay displayed that MIR31HG OE promoted the growth of cancer cells (Fig. 2d). Moreover, we established a subcutaneously implanted tumor model in the nude mice by stably transfecting the FaDu cells with MIR31HG KD or NC lentivirus. After 4 weeks, the tumor volume in the MIR31HG KD group was remarkably smaller than that in the NC group and the tumor weight in the MIR31HG KD group was significantly lighter than that in the NC group (Fig. 2e-g). The Ki67 staining was decreased in xenografts of MIR31HG KD group compared with NC group. These results suggested that MIR31HG could promote HNSCC cells proliferation in vitro and vivo.
×

In this study, for the first time, we showed that lncRNA MIR31HG was specifically overexpressed in HNSCC and found that the overexpression of MIR31HG or the co-expression of HIF1A-positive and p21-negative served as a poor prognostic factors for LSCC patients. LncRNA MIR31HG facilitated HNSCC cell proliferation and tumorigenesis via HIF1A and p21 by promoting cell-cycle progression and inhibiting cell apoptosis. Thus, the results implicated the key role of MIR31HG in HNSCC progression and identified MIR31HG as a prognostic predictor and putative therapeutic target in HNSCC.

We thank all individuals who take part in this research.

All data generated or analyzed during this study are included in this published article and its supplementary information files.

All authors have read and approved the final manuscript, and consent to the publication of the manuscript in Molecular Cancer. 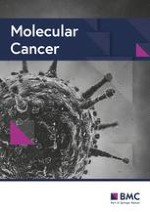 Novel evidence for a PIWI-interacting RNA (piRNA) as an oncogenic mediator of disease progression, and a potential prognostic biomarker in colorectal cancer