PML is a tumor suppressor protein involved in the pathogenesis of promyelocytic leukemia. In non-neuronal cells, PML is a principal component of characteristic nuclear bodies. In the brain, PML has been implicated in the control of embryonic neurogenesis, and in certain physiological and pathological phenomena in the adult brain. Yet, the cellular and subcellular localization of the PML protein in the brain, including its presence in the nuclear bodies, has not been investigated comprehensively. Because the formation of PML bodies appears to be a key aspect in the function of the PML protein, we investigated the presence of these structures and their anatomical distribution, throughout the adult mouse brain. We found that PML is broadly expressed across the gray matter, with the highest levels in the cerebral and cerebellar cortices. In the cerebral cortex PML is present exclusively in neurons, in which it forms well-defined nuclear inclusions containing SUMO-1, SUMO 2/3, but not Daxx. At the ultrastructural level, the appearance of neuronal PML bodies differs from the classic one, i.e., the solitary structure with more or less distinctive capsule. Rather, neuronal PML bodies have the form of small PML protein aggregates located in the close vicinity of chromatin threads. The number, size, and signal intensity of neuronal PML bodies are dynamically influenced by immobilization stress and seizures. Our study indicates that PML bodies are broadly involved in activity-dependent nuclear phenomena in adult neurons. 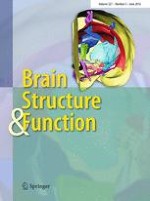 Cortical reorganization in an astronaut’s brain after long-duration spaceflight

A unique cellular scaling rule in the avian auditory system