Urinary citrate is an important inhibitor of calcium-stone formation. Most of the citrate reabsorption in the proximal tubule is thought to occur via a dicarboxylate transporter NaDC1 located in the apical membrane. OK cells, an established opossum kidney proximal tubule cell line, transport citrate but the characteristics change with extracellular calcium such that low calcium solutions stimulate total citrate transport as well as increase the apparent affinity for transport. The present studies address several fundamental properties of this novel process: the polarity of the transport process, the location of the calcium-sensitivity and whether NaDC1 is present in OK cells. OK cells grown on permeable supports exhibited apical >basolateral citrate transport. Apical transport of both citrate and succinate was sensitive to extracellular calcium whereas basolateral transport was not. Apical calcium, rather than basolateral, was the predominant determinant of changes in transport. Also 2,3-dimethylsuccinate, previously identified as an inhibitor of basolateral dicarboxylate transport, inhibited apical citrate uptake. Although the calcium-sensitive transport process in OK cells is functionally not typical NaDC1, NaDC1 is present in OK cells by Western blot and PCR. By immunolocalization studies, NaDC1 was predominantly located in discrete apical membrane or subapical areas. However, by biotinylation, apical NaDC1 decreases in the apical membrane with lowering calcium. In sum, OK cells express a calcium-sensitive/regulated dicarboxylate process at the apical membrane which responds to variations in apical calcium. Despite the functional differences of this process compared to NaDC1, NaDC1 is present in these cells, but predominantly in subapical vesicles. 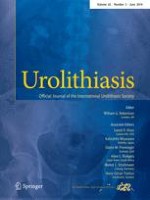 Incidence and risk factors of renal hematoma: a prospective study of 1,300 SWL treatments

Precipitation of amorphous magnesium ammonium phosphate: is it a precursor for staghorn stones?