To see if road distance to hospital influences stoma reversal rate, time from index operation to stoma reversal, and occurrence of permanent stoma.

Data from all diagnosed cases of rectal cancer from three counties in northern Sweden were extracted from the Swedish Rectal Cancer Registry. The three counties are sparsely populated, with a population density roughly one fifth the average density in Sweden. Distances to nearest, operating, and largest hospital were obtained using Google Maps™. Matched data on socioeconomic variables were retrieved from Statistics Sweden.

In univariate logistic regression analysis, patients living closer to the operating hospital had a higher likelihood of non-reversal than those living farther away (OR 0.3; 95% CI 0.12–0.76). However, no difference was seen in the multivariate analysis. Of the 717 cases included, 54% received a permanent stoma and 38% a defunctioning stoma at index surgery. The reversal rate of a defunctioning stoma was 83%. At follow-up, 61% still had a stoma, 89% of these were permanent, and 11% non-reversed defunctioning stomas. Median time to stoma reversal was 287 days (82–1557 days). Of all 227 stoma reversals, 77% were done more than 6 months after index surgery.

Longer distance to hospital is not a risk factor for non-reversal of a defunctioning stoma. Only 23% had their defunctioning stoma reversed within 6 months after index surgery. Future studies aiming to determine reversal rate need to extend their follow-up time in order to receive accurate results.

Titel
Long distance to hospital is not a risk factor for non-reversal of a defunctioning stoma
Autoren:
Simon Näverlo
Karin Strigård
Ulf Gunnarsson 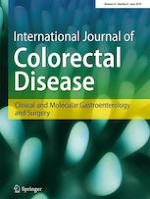 Completeness of total mesorectum excision of laparoscopic versus robotic surgery: a review with a meta-analysis

Is a drain necessary after anterior resection of the rectum? A systematic review and meta-analysis

Lymph node yield, survival benefit, and safety of high and low ligation of the inferior mesenteric artery in colorectal cancer surgery: a systematic review and meta-analysis