Controversy remains regarding biliary reflux after one-anastomosis gastric bypass (OAGB). The aim of this “pilot” study was to analyze biliary reflux and its potential long-term consequences on esogastric mucosae in OAGB-operated rats.

Diet-induced obese rats were subjected to OAGB (n = 10) or sham (n = 4) surgery and followed up for 16 weeks. Evolution of weight and glucose tolerance was analyzed. Bile acid concentration measurement, histological and qRT-PCR analysis were performed in the esogastric segments.

Weight loss and glucose tolerance were improved after OAGB. Mean bile acid concentration was 4.2 times higher in the esogastric segments of OAGB rats (compared to sham). A foveolar hyperplasia of the gastro-jejunal anastomosis and an eosinophilic polynuclear cell infiltration were observed in OAGB rats. An esophageal hyper-papillomatosis was observed in both groups (OAGB = 50%, sham = 50%). qRT-PCR analysis showed no differences between OAGB and sham mRNA levels of Barrett’s esophagus or esogastric carcinogenic-specific genes. No intestinal metaplasia, dysplasia, or cancer were observed after a 16-week follow-up.

After a 16-week follow-up, this pilot study confirmed the good reproducibility of our OAGB rat model. OAGB rats had not developed any pre-cancerous or cancerous lesions. Further experimental studies with longer term follow-up are required. 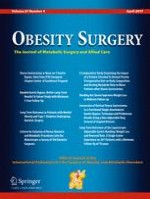 Is It Justified to Have a Lower BMI Cutoff for Metabolic Surgery for Asians with Type 2 Diabetes?

Revision of Biliopancreatic Diversion for Side Effects or Insufficient Weight Loss: Codification of a New Procedure

Reply to “Reviews of One Anastomosis Gastric Bypass” by K. Mahawar