One-anastomosis gastric bypass/mini-gastric bypass (OAGB/MGB) remains controversial because it may cause chronic biliary reflux (BR). The risk of developing esogastric cancer due to BR after OAGB/MGB is based on the results of experimental rat studies using esojejunostomy (EJ). The aim of this study was to analyze the potential long-term consequences of BR on the esogastric mucosae in OAGB/MGB-operated rats and to compare these results to those from the use of EJ.

After a 30-week follow-up period, OAGB/MGB rats did not develop any precancerous or cancerous lesions when more than 40% of EJ rats had intestinal metaplasia. 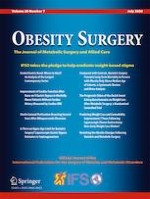 Celiac Disease and Obesity: Is Bariatric Surgery an Option?

Eroded Gastric Band: Where to Next? An Analysis of the Largest Contemporary Series

Is There an Upper Age Limit for Bariatric Surgery? Laparoscopic Gastric Bypass Outcomes in Septuagenarians