HTLV-1 proviral load (pvl) is an important risk marker for HTLV-1-associated myelopathy/tropical spastic paraparesis (HAM/TSP), but its value as prognostic marker is not well defined. Long-term prospective cohort studies are necessary to clarify this question. Here, we analyzed HTLV-1 pvl in the peripheral blood of 82 asymptomatic carriers (AC; 351 samples), 12 HAM/TSP patients (HAM; 46 samples), and six incident cases of HAM/TSP (iHAM), with serial samples collected before (n = 10) and after (n = 20) the disease onset. The mean interval of follow-up was 10 years in the AC group and 8 years in HAM and iHAM groups. pvl was not significantly different between the first and last measurements in the three groups, but there was a trend to decrease over time. Coefficient of variation of pvl was significantly lower in the AC group than in HAM (p = 0.015) and iHAM (p = 0.022) patients. AC and HAM individuals showed a significant and strong positive correlation between the first and last measurements of pvl, but not iHAM subjects. All individuals who developed HAM/TSP during the follow-up had high pvl level (>1 %) before the onset of disease, but a typical increase in pvl was not observed in that period. The data suggest that there is a trend to reach an equilibrium plateau of pvl over time, characteristic of each individual. A significant rate of AC keeps high pvl levels for a long time without developing clinical symptoms associated to HTLV-1 infection. Thus, serial quantification of pvl in the peripheral blood does not seem to be a good prognostic marker for HAM/TSP. 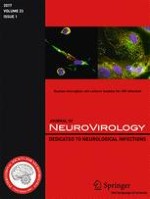 Immortalization of primary microglia: a new platform to study HIV regulation in the central nervous system

Evaluating the accuracy of self-report for the diagnosis of HIV-associated neurocognitive disorder (HAND): defining “symptomatic” versus “asymptomatic” HAND

Review of functional MRI in HIV: effects of aging and medication